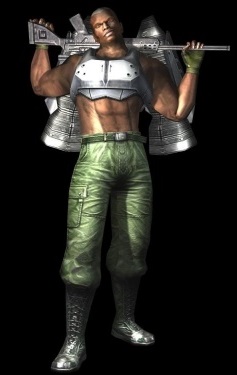 Jared Hunter is the main antagonist of the Grassmarket District stage in Time Crisis: Crisis Zone.

Six months after the Garland Square incident, the new leader of the U.R.D.A., Jared Hunter, kidnaps the S.T.F. commander's daughter Melissa Kessler, and occupies the Belforte Hotel as their headquarters. He demands that the S.T.F. releases his comrades or he will have her in jeopardy. Jared vows to get his revenge on the S.T.F. in retaliation for their previous defeat and for Lynch's death. The squad then destroy the A-0940 tank in Grassmarket District and launch an assault on the hotel. They soon arrive at the pool area and face off against Jared who is flying in a jetpack. After his defeat, Jared escapes on a boat and McGarren pursues the terrorist leader in an aircraft-to-boat chase. Eventually, the boat is destroyed, taking Jared with it.

Retrieved from "https://villains.fandom.com/wiki/Jared_Hunter?oldid=3716854"
Community content is available under CC-BY-SA unless otherwise noted.