Wipe out all his foes.

Kill Kano for deserting him.
Gain the god-like power of Blaze to become a god & steal the Chi from everyone else

Jarek is a member of the Black Dragon criminal organization and a villain from the Mortal Kombat series of fighting games.

Jarek is skilled fighter and has the ability to perform Kano's cannonball attack, but he also has a vertical version of it. He can also stomp to create a small but powerful tremor and uses a rope that allows him to lasso an opponent or anchor himself to the ground while he flies at his opponent. Jarek can also shoot a laser out of his eye to perform one of Kano's fatalities, but there is no explanation as to how he does this. He also has a star shaped blade that he uses as a throwing weapon. 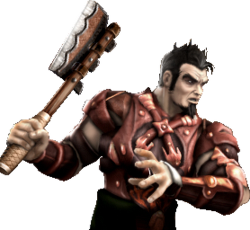 Retrieved from "https://villains.fandom.com/wiki/Jarek?oldid=3875110"
Community content is available under CC-BY-SA unless otherwise noted.