Jarko Grimwood is a supporting antagonist in Blade: Trinity. He is a vampire and a henchman for Danica Talos and Asher Talos.

He was portrayed by the professional wrestler Triple H.

Jarko joined the Talos siblings in uncovering the tomb of the vampire progenitor Dracula. He later accompanies them as they oversee the capture of Blade, only to have an eye gouged out by Abigail Whistler when Blade is rescued by the Nightstalkers.

Later on, Hannibal King is captured and the other Nightstalkers are wiped out. Jarko amuses himself by beating and torturing King, even introducing King to his pet dog Pac-Man, which is also a vampire.

When Blade and Abigail invade Danica's lair, they free King who joins the fight. Jarko is enraged when he finds out that King killed Pac-Man and beats him to the floor. He then picks King up and is about to bite his neck when King suddenly crams a UV flash bomb into his mouth. Jarko's metal fangs pierce the bomb's shell and it goes off, the ultraviolet burst causing Jarko to disintegrate into ash. 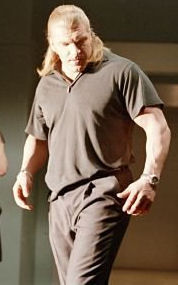