Jarnake Saucer is a snake-themed Gangler Monster and is the main antagonist in episode 38 of the2018 TV series Kaitou Sentai Lupinranger VS Keisatsu Sentai Patranger. Also he is equipped with a RC Controller-like treasure called Elle me rend fou.

He was voiced by Takashi Matsuyama.

Jarnake Saucer made his first appearance alongside with his childhood friend named Iselob Starfryed terrorize the people of Japan until the cops showed up to stop them. He used the treasure's ability to make the van to attack the police, but they managed to dodge out of the way. So the police transformed as they dodge the incoming vehicles that were being controlled by the treasure's ability. However before the battle commence between the two Zamigo Delma shows up and freezes Iselob because he needs Jarnake assistance into getting the VictoryStriker by using the treasure's ability.

A while later he appears at the exact location where he took control of the VictoryStriker in order to attack the flying Lupinrangers. However Noel saw him using the treasure's ability to do his bidding, so Noel transformed and is about to battle Jarnake however thanks to the arrival of Destra Majjo well Noel battles him instead as Jarnake continues his job controlling the VictoryStriker. As this goes on Destra was about to finish Noel off, but he was saved by the arrival of the police. So they transformed and battles Destra with Noel.

As this goes on Lupin Red notice that there's a second vehicle called the SirenStriker stash within the controlled VictoryStriker, so he used this advantage to send Jarnake right in front of Noel, so that way he can gain access to Jarnake's safe (which his password is 1-0-6) and got Elle me rend fou (which translate as "She drives Me Crazy") RC Controller because with that out of his safe the VictoryStriker is now in the capable hands of the Lupinrangers. After that Jarnake was then taken out by the police.

However thanks to Goche Ru Medou he's then enlarged and is now being assisted by a pink Goram as they battle Siren Lupin Kaiser (which is odd because Goram hasn't been shown during the giant battle) after that he was then finished off by this finisher called Good Striker: Blow em to Smithereens Cannon. 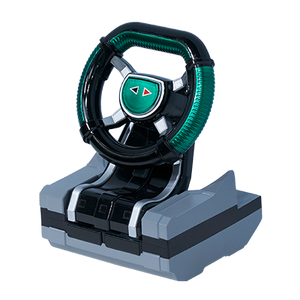 "She drives Me Crazy/Elle me rend fou" RC Controller