Killing enemies of the Illuminati (and people in general)

Jaron Namir is one of the main antagonists of the cyberpunk sci-fi game Deus Ex: Human Revolution. He is the leader of the mercenary black-ops organization known as The Tyrants and is a Private Military Contractor for the Belltower Associates Organization and an agent of the illusive secret society the Illuminati.

He is voiced by Michael Rudder.

Known for his merciless nature as a brutal serial killer, Jaron Namir had lived a private life as a devout and religious parent to his children and his wife Laya. At the age of nineteen, his sister Melina was killed in a supposed car accident in Hafia, Israel and was eventually recruited into the Israeli Intelligence Agency known as The Mossad. His psychological description was taken during his time in the Mossad and was revealed that he had a great level of guilt over Melina's death and named his daughter after her to honor her sister. He received scars and injuries during the Pan-Arab invasion and war with Israel sometime in the Mid-Late 2020s and is the reason for his massive augmentations.

Agent of the Illuminati

Sometime later on in his life, Namir had became a member of the secretive and all-powerful Illuminati and became one of the organization's field agents. He formed the augmented black-ops team known as The Tyrants and hired Lawrence Barrett, Yelena Fedorova, Scott Hardesty, and Joe Wexler as the core members of the team. In 2027, Namir led a Tyrants assassination attack against American Senator Jane Skyler during a meeting with the Caiden Global CEO, Garret Dansky. The Senator was left alive but the Dansky was killed by the Tyrants and Gunther Hermann had assassinated Secret Service Agent Matt Ryan. Wexler was then killed by Anna Kelso and so Namir needed a replacement for him.

Jaron was sent to Australia by orders of the Illuminati sometime during the Australian Civil War where he shot down a VTOL Gunship and killed nearly all the members of the Belltower Strike Team Six. Ben Saxon was the only survivor and Jaron lied and manipulated Saxon into joining The Tyrants. Namir and the rest of The Tyrants soon traveled to Russia where they assassinated Mikhail Kontarsky, a government official and Administrator of the Russian Committee on Human Augmentation. The mission was a success and the minister was killed but soon their after, Namir was confronted by Saxon who discovered the truth and knew about what happened in Australia. Saxon then defected and flew out of the Tyrants private jet.

In 2027, The Tyrants were ordered to attack and ravage Sarif Industries and acquire their research and scientists before they could share their findings on human augmentations that could lead to the next step in human evolution. Namir sent Saxon, Hermann, and Hardesty to Washington DC to kill Ron Temple of the Secret Service and went with Yelena and Barret along with a few augmented black-ops soldiers and raided the company's headquarters. Jaron then beat down and shot the Cheif of Sarif Security, Adam Jensen, and then shot him but he secretly survived, and took Megan Reed away.

Six months later, Jensen is still alive, and is now on the hunt for The Tyrants. Namir is first seen by Jensen in Highland Park where he and Yelena are about to exit a FEMA Camp when Barret faces Jensen and fights him while the other two leave. Namir will literally not appear again until when Jensen arrives in Singapore where he confronts Zhao Yun Ru on the conspiracy that he's uncovered and Namir is left to deal with Jensen. Namir then engages Jensen in a firefight but is overpowered and taken down. As Jensen grabs onto him and demands to know where Megan Reed is, Namir says "Men like us...we never get back the things we love" possibly a reference to his sister.

Namir is the most augmented character in the entire game with 90% of his entire body being augmented. His left eye is one of the very few organic parts of his body. His entire body is one big augmentation with dermal armor and mechanical limbs having the appearance of the human musculoskeletal system. He wears a set of black military gear on him to cover his augmented body.

Jaron Namir is a shown to be a cold and cruel man. He is known for his brutal nature as a cold-hearted and merciless killer and he still practices it in the game. He is obedient towards The Illuminati and follows their orders without questioning. He feels deep guilt for the death of his sister, whom he loved greatly, and lived another life as a devout and religious father to his loving wife and kids. 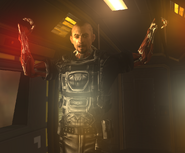 Namir during the mission in Moscow, Russia 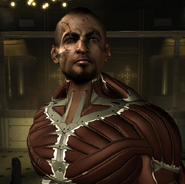 Jaron and photos of his wife and kids

Namir and Sam Duarte during a meeting with Bob Page

Jaron shooting Adam Jensen
Add a photo to this gallery

Retrieved from "https://villains.fandom.com/wiki/Jaron_Namir?oldid=3889998"
Community content is available under CC-BY-SA unless otherwise noted.