Get revenge on Jay (failed).

Jarra is a supporting antagonist of the 2002 sci-fi comedy film Men In Black II, and the main antagonist of the video game MIB 2: Alien Escape. He is a brilliant and intergalactic criminal genius that is from a species of unknown aliens.

He was portrayed by John Alexander, who also played Mikey in the first Men In Black film.

Jarra first appears wearing a large black bell shaped coat, when the coat came off it was revealed that he is very scrawny and his lower half is a small flying saucer with multiple controls for flying and numerous other things.

Jarra once tried to steal the Earth's ozone to sell on the black market. He was foiled by Jay and arrested then imprisoned at MiB Headquarters. When Serleena came to Earth in her quest for the Light of Zartha and took over MIB HQ, she released much of the criminals (including Jarra). Bent for revenge against Jay, Jarra offered a deal with Serleena: he would build her a ship that could travel 300 times the speed of light, and she will get Jay for him in return. Serleena gladly accepts the deal and Jarra builds the ship as promised.

After Serleena manages to lure the agents back into MiB HQ, she confronts Kay while letting Jay be at the mercy of Jarra and his mini-clones. During the fight between the two, Jay manages to make Jarra crash into one of his mini clones, destroying them in an explosion of blue flames instantly. 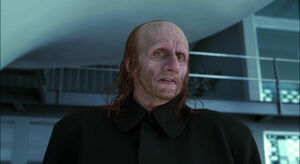 Jarra making a deal with Serleena. 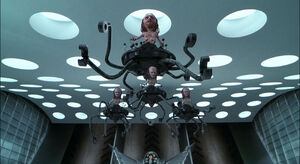