Jarvis is a minor antagonist in Dragon Quest XI.

He is voiced by Kenyu Horiuchi in the Japanese version, and by Timothy Watson in the English version.

Jarvis was first seen berating his minions for letting Veronica to flee. Since he needed all of her power to earn the respect of Mordegon. His conservation with his minions was heard by the Luminary, Erik, Serena and Veronica. However, Serena and Veronica were scared by one of Jarvis's minion from behind. Thus explosing them to Jarvis. Much to the dragon's delight. He then attacked them with his minions, but weres all defeated. Jarvis, now feeling saddened about the fact that he would never be Mordegon's minion. He was asked by Erik who Mordegon is, to where Jarvis tells them they would find out soon before dying.

Jarvis is a cyan dragon that holds a pot. 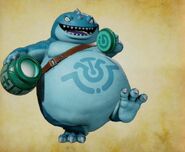 Jarvis in PS4
Add a photo to this gallery

Retrieved from "https://villains.fandom.com/wiki/Jarvis_(Dragon_Quest)?oldid=4096663"
Community content is available under CC-BY-SA unless otherwise noted.