Establish a New World Order so as to create a peaceful benevolent utopia under her rule.

Jasmine is one of the two main antagonists (alongside Angelus) in the fourth season of the Buffyverse TV series Angel.

She was also unique amongst Buffy villains, in the fact, she was not truly malevolent. In fact she was a force of good, sadly her methods were akin to those of a fascist dictator and as such made her a danger to everyone around her including her cosmic former allies known as The Powers That Be whom she used to be a member of.

She was portrayed by Gina Torres, who also voiced Airachnid in Transformers: Prime and Superwoman in Justice League: Crisis on Two Earths and in Lego DC Supervillains. While possessing Cordelia Chase she was portrayed by Charisma Carpenter.

Angel attempted to give Darla, who was dying at the time, a second chance at life by passing a series of trials. However, unbeknownst to Angel, Darla couldn't use the new second chance because she was already on her second life.

Jasmine claimed that she was able to use the life that Angel earned to create Connor after he had sex with Darla (who had been re-sired by Drusilla at the behest of Wolfram & Hart). Following the birth of Connor, Jasmine was able to maneuver Cordelia with Skip's assistance into becoming part-demon and later ascending into the realm of the Powers.

Once in the realm of the Powers, Cordelia found herself consumed with boredom. Cordelia eventually elected to give up her godhood and return to Earth in her previous half-demon form, but Jasmine used this interdimensional trip to "piggy-back" into our dimension by possessing Cordelia. However, the Powers had in place a safeguard for this type of travel.

Jasmine finally blew her cover during a secret ritual where Lorne was expected to be alone, "Cordelia" arrived with a large knife to kill him. It was really a trap set by the AI team who had all realized that Cordelia was possessed, but she was saved by Connor.

Though she kept her human appearance, she was covered in boils and her eyes turned purple. Her followers ran horrified as the sensation of inner peace and bliss they experienced as part of Jasmine's collective was obliterated. Many caused riots and chaos, while others even contemplated suicide. With her name revealed, Jasmine's mind control powers were destroyed, though she kept her superhuman strength and could easily withstand electricity. Her unique psychic link with Connor also remained, as their connection was of a different nature. Through this link, Connor tracked down Jasmine.

Soon after, Jasmine was attacked by an increasingly unstable Connor, who then killed her by putting his fist through her head. 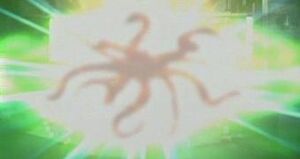 The birth of Jasmine in her "true" form. 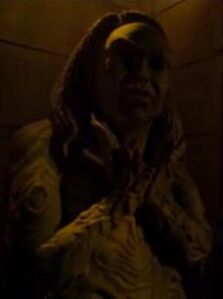 The statue of Jasmine, the Blessed Devourer. 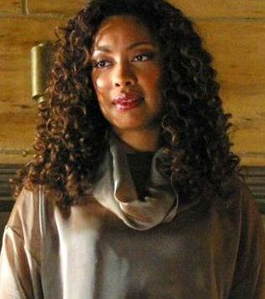 Jasmine after taking a human form.