Experimenting with his poisons.

Recover the smuggled poisons that were stolen from him (succeeded).

Force people to make fateful decisions to prove that they were just like him.
Make "amends" and escape Hell (both failed).

After having manufactured horrible poisons, Carlisle contacts famous people, forcing them to disfigure the body parts that made them famous, e.g. the hand of a famous surgeon, or be responsible for the death of an innocent college student Carlisle poisoned with his drug.

He was portrayed by Tim DeKay, who also played Christian Ward on Marvel's Agents of S.H.I.E.L.D.

Jason Carlisle was a lecturer at an university. In his past, Carlisle drove as a passenger in a car when an accident happened. After escaping from the burning car, Carlisle went back to the wreckage to save the bag containing his dissertation on which he had worked for four years. He then fled from the car, leaving the driver, college student working as an Uber driver, to die in the explosion that engulfed the car moments later. As the incident was recorded on a security cam, Carlisle was openly humiliated, lost his job and his wife eventually left him. This caused severe trauma in Carlisle, who made it his goal to prove that everyone would have acted the same as him if they were in his position.

Carlisle eventually got another job at the rival collage of the one dismissing him. At some point, Carlisle has designer poisons and antidotes manufactured, which burns its victims from within, which he intended to use for his plan.

While having Burt smuggling his poisons into the city, some of Carlisle's vials go missing. To get them back, Carlisle confronted the thief himself who thought that what he stole was mere cocaine and realized that something was not right after spilling one of the vials on himself. After the terrified man was found by Carlisle, he asks Carlisle what is happening to him. Carlisle does not reply and merely strangles the thief, retrieves his drugs and leaves.

After re-obtaining his poisons, Carlisle put his plan into action, starting with sending an email, which contains a video, from a hacked account to actor Johnny Kane. In the video, Carlisle at first admires Kane for being a talented and well-acclaimed actor and tells Kane that it will be interesting to see which decision he makes. He tells Kane that Kane will cut and disfigure his own face with a knife or else a young college student will die from poisoning. He gives Kane an ultimatum of twenty-four hours and after Kane does not cut his face, indeed poisons the freshman who dies in his dorm.

Carlisle later contacts Dr. Gwendolyn Scott, a renowned surgeon, sending her a similar message as the one to Kane. He gives her the choice between destroying her hand or allowing another college student to die from poisoning. This message is witnessed by Lucifer and Detective Chloe Decker, who have found the person whose email address Carlisle used to send his threats. Although Chloe and Lucifer find the student in time, the poison in her system is different from the one used on the first victim, making the fabricated anti-venom useless. After hearing this, Dr. Scott willingly destroys her hand to save the girl's life. After having been mailed a photo of Scott's mutilated hand, Carlisle sends a courier who delivers the antidote and a message in which Carlisle claims to be a man of his word.

Eventually, the police connect the murders to Carlisle, who had given flu shots to both victims. To provoke Carlisle into making a mistake, Chloe Decker goes with Lucifer Morningstar's idea to send him an insulting email. Carlisle responds immediately, sending back a link which creates a video connection between both computers. During the conversation, Carlisle claims that Dr. Scott only mutilated her hand because she was being observed. He claims that this revelation will help him to fine-tune his experiments. He then turns the camera, revealing that he took a student and a famous sprinter captive. The sprinter's leg is lying under a guillotine which the sprinter can activate by pressing a lever. If he does so within sixty minutes, the student will receive the antidote for the poison in his veins. Before ending the video call, Carlisle tells Chloe not to bother making another antidote as every poison he uses is individual and that the only real 'antidote' is in Carlisle's head, meaning that only he knew the formula.

After linking Carlisle to the death of the drug thief in Chicago, the police check video footage from the airport and find evidence about Carlisle's location, the rival college of the one he was fired from. Arriving at the college, Decker and Lucifer are confronted by Carlisle from behind a locked, bullet-proof door. Carlisle tells Chloe that she is actually part of his experiment. He holds two vials into the air, claiming that one contains the anti-dote for the student while the other is a poisonous gas. After putting on a gas mask, Carlisle shatters the vial containing the deadly gas and leaves the antidote lying around, leaving it to Chloe to sacrifice herself by entering the poisoned room or saving herself but leaving the student to die.

Carlisle leaves the college, expecting that he will be followed. However, Lucifer convinces Chloe to go after Carlisle while he remains behind to save the students. Chloe runs after Carlisle, eventually catching up to him while he attempts to flee through the college. With his back to the wall, Carlisle claims that he knew Chloe would save herself, as this was the only choice she could make. Claiming that he is no monster but only a human with moral decisions, Carlisle then draws a knife and cuts his own throat, bleeding out right before Chloe. However, it is later revealed that he also secretly poisoned Chloe when she momentarily tacked him during their fight and that the only person who knew the antidote - he himself - is now dead.

After his suicide, Carlisle's spirit is sent straight to Hell, where he is forced to live through the accident and the shame resulting from it over and over again. In Hell, he is eventually confronted by Lucifer who had killed himself to interrogate Carlisle for the formula. Carlisle begs Lucifer to help him getting out of Hell, to which Lucifer claims that he can't. However, Lucifer claims that making amends might help him, as in order to leave Hell he must convince himself that he does not deserve being there. Ready to make amends, Carlisle hands Lucifer the formula to the poison. Smiling evilly, Lucifer then leaves the screaming Carlisle whose torment began anew. 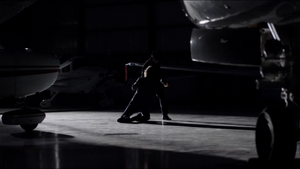 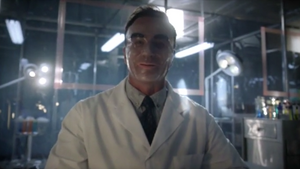 Carlisle's message to his blackmail victims whilst wearing a mask. 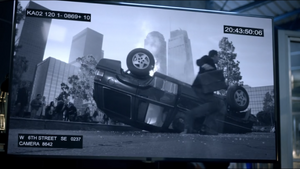 Footage of Carlisle escaping from a burning car while letting an innocent kid die. 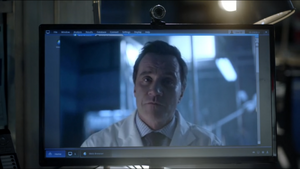 Carlisle revealing himself to Lucifer, Chloe and Dan. 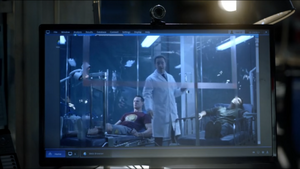 Carlisle reveals himself to have kidnapped college students. 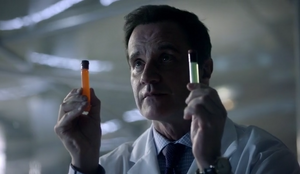 Carlisle showing his poison and antidote to Lucifer and Chloe. 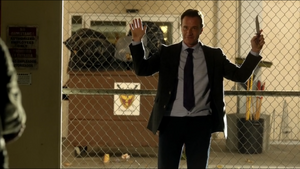 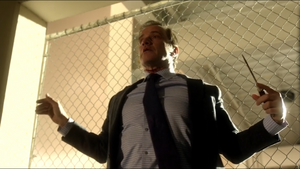 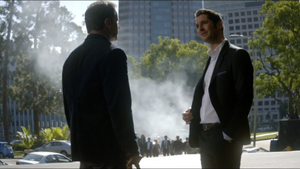 Lucifer explaining to Carlisle that he is in Hell now. 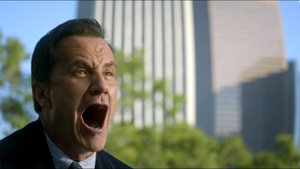 Carlisle screaming as Lucifer leaves him to suffer in Hell for his actions.