Villains Wiki
Register
Don't have an account?
Sign In
Advertisement
in: Articles under construction, Spoilers, Stranger Things Villains,
and 52 more

Catch Eddie Munson and presumably kill him to avenge the death of Chrissy Cunningham.
Kill any of Eddie's friends who protect him (both ultimately failed).
Kill Lucas Sinclair for his betrayal and save Max Mayfield (partially succeeded, but in vain).
Stop the Hawkins murders of 1986 (briefly indirectly succeeded, but it got much worse).

Jason Carver is the secondary antagonist of Season 4 of Stranger Things.

He is a rich athlete dating the most popular girl in school, his perfect world begins to unravel as a new evil threatens Hawkins. Upon Chrissy and Patrick's deaths, Carver leads a witch hunt against Eddie Munson due to his ties to Dungeons & Dragons. This leads to his friendship with Lucas Sinclair to end. Even worse, he was also driven to insanity of hurting or killing anyone who is friends with Eddie, even those who tries to protect him.

He is portrayed by Mason Dye, who also played Garrett in Teen Wolf.

Jason is a prideful, preppy and popular young man with a sense of patriotism for his town and school. Unlike many popular students in the show (like Billy, Angela, Tommy H. and Carol and Troy and James) he doesn't bully people "beneath" him and acts on what he thinks is right, never once taking any sadistic pleasure in his actions or doing cruel things for the sake of it. While he disliked Eddie, he never went to the extent of harassing him for no reason and he only responded after Eddie antagonized him first for no reason. He genuinely respects his friends and especially girlfriend. He is also accepting towards Lucas, welcoming him into his friend group at first and showing concern for him at his hangover. He is capable of motivating speeches, using the tragedies of Hawkins to incite people for a game.

Although believing himself to be a good person, he is not as good of a boyfriend as he thinks he is, being unable to see that Chrissy was struggling with anxiety and depression. He is completely unable to accept this fact, viewing her as perfect. It is likely their relationship only formed since they are the two popular kids.

After Chrissy's death, he becomes determined to avenge her. This determination, however quickly turns into short-sighted rage. He fully believes Eddie is responsible for her death due to incriminating evidence. He stubbornly believes Eddie to be part of a Satanic cult and is unable to accept any other answer. He is fully willing to travel around and beat anyone affiliated with Eddie or D&D. However, Jason’s motivation was also partially done out of a desire to stop future murders, believing Eddie would kill again.

After witnessing his friend, Patrick's death, he becomes horrified and heartbroken, carrying Patrick’s corpse back to shore in grief, even more mentally unstable. He covertly threatens Nancy with a gun, knowing her brother is affiliated with D&D. When he sees what he thinks is Max getting possessed as part of a Satanic cult, he is determined to save her and kill Lucas. Even after hearing the truth from Lucas, he is completely unable to accept this fact, showing how far off the edge he’s fall due to his grief and lack of sleep. He dies thinking he was doing a heroic deed when in actuality, he indirectly led Max to her demise.

Jason first appears when he walks into the high school gymnasium with his basketball team and greets all the high school kids. He proclaims his love for Chrissy and then gives a speech honoring all the people who died in previous seasons, though the truth about them is twisted, which displeases Mike and his friends. Then, he makes his match and wins the victory with great joy thanks to Lucas. In the evening, with his friends, Jason and his group decide to go celebrate the victory of the match and drink in an old barrack. During the night, his girlfriend Chrissy is killed by an evil entity, Vecna.

The next day, Jason is questioned by police officers Powell and Callahan while his friends wait outside the house. When Powell mentions Eddie, Jason refutes that Chrissy would have spoken with him and Powell remains silent. Realizing that Eddie probably killed his girlfriend, Jason comes out of the shack and screams in the forest, devastated.

Later on, Jason and his team (including Lucas) attempt to find and catch Eddie by assaulting Gareth, a Hellfire Club member and threatening to break his fingers. One of his target is Dustin, Jason and his team going to Dustin's house to find and assault him, luckily, Dustin aren't home at the time, Lucas then took this opportunity sneaks into Dustin's room to use his radio in the room to communicate with Dustin. However, Jason caught Lucas sneaking into the room, Lucas avoided by telling that he was looking for evidence and gives Jason and his team the fake hideout. Then Jason and his team are heading to abandoned house where Lucas lied to Jason that this place is Eddie's hideout, Lucas secretly escape from the house and Jason finally realized that he was fooled.

After returning from abandoned house, he found out that Lucas was former Hellfire Club member, enraged by the fact, he and his team thinks Lucas is actually the mole all along (which is not true). After attending Chrissy’s funeral, he’s shows his friends Lucas was a member of Hellfire. A freshman informs him about Reefer Rick’s house and Jason accepts his evidence.

Jason and his team locate Eddie's real hideout and finally find Eddie, Eddie tried to escape in a boat while Jason and his teammate Patrick swim after him, but at the moment, Vecna kills Patrick in front of Jason and Eddie. Horrified by the incident he saw, he blamed Eddie on his friend's death, thinking that Eddie sold his soul to Satan to have supernatural power and used it to kill Patrick and escape.

After the incident, he become religious fanatical and blame Dungeons & Dragons that it was the source of Satan's power, and told every adults in Hawkins to find and catch Eddie Munson and every members of Hellfire Club to the punishment for the crimes (which none of them commit). After inciting a lynch mob, he and his friends begin to supply weapons like guns and knives. Jason purchases a 357-magnum revolver and practices with it, and later encounters Nancy wheeler at the gun store. He becomes suspicious of Nancy following the encounter,believing she and her friends are connected with Eddie in some way. Plus even knowing that her brother Mike is friends with Eddie and wonders where he's at, but Nancy tells him to back off.

Later on, Jason is informed of suspicious activity happening at the Creel house, and goes there with Andy to investigate. Entering the home, he finds Lucas with Max, who is going into a state to help her friends defeat Vecna. Jason holds Lucas at gunpoint, believing that he placed Max in her trance and is about to sacrifice her. Lucas tore to explain the situation and while Jason initially listens, he flies into rage after Lucas tells him Chrissy was getting drugs from Eddie. Lucas manages knock the gun off his hands and gets the upper hand in their fight, knocking Jason unconscious, but Carver destroyed Mayfield's headphones, leaving Sinclair without a way to save Max from being crippled by Vecna. Following Mayfield's death, Vecna's plans go into motion as the gates open, with the first vine going through the Creel house. As the vines move through, Jason awakes from his encounter, but is bisected from the fire-like radiation that the vines emit. Despite their differences in the end, Lucas was still saddened by Jason’s death. The townspeople were seen writing his bible quotes on the church, showing how he continued to motivate people even in death. 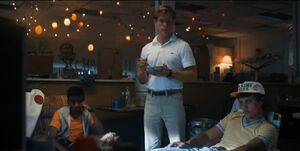 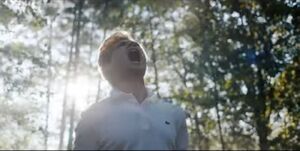 Jason talking with Chief Powell, telling the officer that Eddie murdered his girlfriend 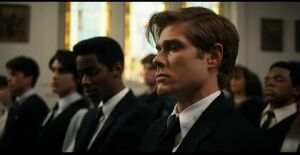 Jason and his buddies planning the hunt.

Jason and his friends at the meeting hall. 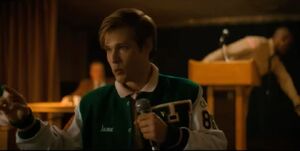 Jason speaking about Eddie to the townspeople.

Jason training with his gun. 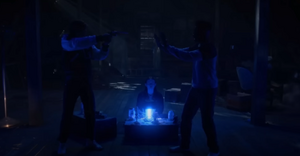 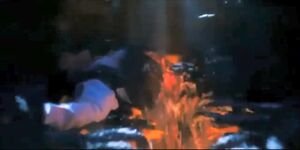