Following the media coverage of his crimes

Jason Clark Battle is a supporting antagonist in the Criminal Minds episode "Lucky", and the main antagonist of the episode "Penelope". He is a serial killer who wants to become famous, and shoots and critically injures Penelope Garcia, the technical analyst for the FBI's Behavioral Science Unit (BAU).

He is portrayed by Bailey Chase.

Battle is a violent psychopath who is obsessed with becoming a "household name" serial killer like Ted Bundy and John Wayne Gacy. He works as a sheriff's deputy and appears to be a model officer, even earning medals for bravery in the line of duty. His psychological examinations reveal psychopathic tendencies, however, so his superiors repeatedly decline to promote him.

Immediately prior the events of the episode, Battle shoots and kills three people in separate attacks, manipulating the crime scenes to make it look as if the shootings were committed by someone else. He wants ultimately to become famous by challenging the BAU, and decides to begin by targeting Garcia, whom he knows has been investigating his murders.

Battle meets Garcia, seemingly by chance, at her favorite coffee shop; when he loudly complains that his laptop isn't working, she helps him fix it, and he introduces himself as James Colby Baylor. Garcia is immediately attracted to him, and is thrilled when he asks her out. They go out to a restaurant, and afterwards Battle walks her home, saying, "I've been thinking about doing this all night." Thinking he is about to kiss her, Garcia excitedly turns around, only for him to shoot her.

Days later, Battle returns to Garcia's house, now a crime scene, and finds out that Garcia survived. He begins stalking her after she is released from the hospital. He tries to break into her house, but is chased off by her BAU colleague and friend Derek Morgan, who doesn't see his face.

Battle infiltrates the BAU headquarters by meeting with FBI Internal Affairs agent Adam Fuchs to discuss FBI interference with his cases. He meets Garcia's fellow technical analyst Kevin Lynch, who sees that he resembles Garcia's description of her attacker and sends Garcia a warning email while pretending to remove Battle's files from the FBI database. Terrified, Garcia alerts the rest of the BAU.

Battle realizes from Lynch's affect that he in on to him, and sees several BAU agents heading toward him. He takes Fuchs hostage, hoping to die in a gun battle with the FBI in which he takes as many agents as possible down with him. To buy time, Supervisory Agent David Rossi tells Battle that he doesn't want his career to end so ignobly, but Battle retorts that he is going to be a legend and mocks the BAU for failing to see his true motives. While they are talking, Agent Jennifer Jareau sneaks up behind him, and when he senses her presence and turns around, Jareau shoots him between the eyes, killing him. 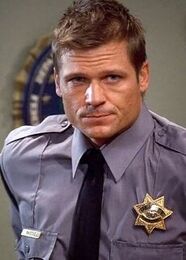