Flirting with Veronica Sawyer.
Smoking.
Taking interest in cryptozoology.
Being a squish.
Murdering people.
Making deep quotes about the state of society that are oddly relevant today.
Riding his motorcycle.

Kill Ram Sweeney & Kurt Kelly (both succeeded).
Kill everyone in Westerberg High School with a bomb (failed).
Make sure Veronica does not sacrifice herself (succeeded).

Jason Dean, also nicknamed "J.D.", is the main antagonist of the 1989 black comedy & Thriller film Heathers and the musical of the same name.

He was portrayed by Christian Slater, who also played Michael Griffin in Hollow Man 2, Edward Alderson and the title character in Mr. Robot, Robert Boyd in Very Bad Things, Ushari in The Lion Guard, Special Agent Slater in Archer, Jimmy Dolan in Dolan's Cadillac, and Rand Ridley in Inside Job.

In the TV series, he was played by James Scully, who also played Forty Quinn in You.

Jason Dean's father, Big Bud Dean, has a construction/demolition company that often causes him to move to various places. J.D. mentions having lived in Las Vegas, Nevada, Baton Rouge, Louisiana and Dallas, Texas before he moved to Sherwood, Ohio.

After being harassed, J.D. pulls his gun on school bullies Ram Sweeney & Kurt Kelly and fires blanks at them. Veronica Sawyer finds herself fascinated by this dark and quirky newcomer. He meets Veronica at a convenience store, where they proceed to flirt with each other. When Veronica embarrasses Heather Chandler at a frat party, Heather vows to destroy her reputation. Later, J.D. shows up at Veronica's house and they end up having sex after an impromptu game of "strip croquet". Veronica tells J.D. she wants to make Heather puke her guts out. The next morning, Veronica and J.D. break into Heather's house. J.D. serves Heather a liquid he claims is a hangover cure but is actually drain cleaner, killing her. Although initially shaken by their act, J.D. regains his composure and urges Veronica to forge a dramatic suicide note in Heather's handwriting.

The school and community look on Heather's apparent suicide as a tragic decision made by a popular but troubled teenager. Heather Duke soon shows her true colors by stepping into Heather Chandler's former role as clique leader and begins wearing a red scrunchie that had belonged to Chandler as a symbol of her new status.

Several days later, Ram Sweeney & Kurt Kelly spread a rumor about Veronica giving them oral sex. To get even, J.D. proposes that Veronica lure them into the woods with the promise to "make the rumors true," then shoot them with what he promises are nonfatal "Ich lüge" German bullets that only break the skin but do no real damage.

Afterward they would humiliate Kurt and Ram by planting "gay" materials, such as a Joan Crawford photo and mineral water, on their unconscious bodies. However, JD is lying; the bullets are in fact real (Ich lüge means "I'm lying" in German). At the rendezvous in the woods, JD shoots Ram but Veronica misses Kurt, who runs away. Seeing Ram Sweeney & Kurt Kelly dead on the ground, Veronica to her horror realizes that the bullets are real after all. J.D. chases Kurt back towards Veronica, who panics and shoots him dead.

J.D. plants the "gay" materials beside the boys, and a forged suicide note stating the two were lovers participating in a suicide pact. At their funeral, the boys are made into martyrs against homophobia.

Veronica finally decides she's had enough and breaks up with J.D. He later climbs into her room with his revolver to kill her but finds Veronica hanging from a noose. Thinking she's dead, he talks about his plan to blow up the school during a pep rally. A petition he has been circulating via Heather Duke, to get the band Big Fun to perform on campus, was actually a mass suicide note. Most of the students had already signed, so the mass murder would appear to be a mass suicide instead. However, unbeknownst to J.D., Veronica faked the hanging by rigging herself with a harness around her waist.

Now clued into J.D.'s plot to blow up the entire student body, she confronts him in the boiler room below the gym where he is rigging timed explosives. She shoots him multiple times with his own gun when he refuses to stop the bomb. As J.D. collapses, he stabs the timer and it stops. Veronica walks outside to find the severely injured J.D. with the bomb strapped to his chest, which he detonates as Veronica looks on impassively with an unlit cigarette hanging from her lips. As the bomb explodes, J.D. dies while the blast singes Veronica and lights her cigarette.

J.D. was good with guns since he carried a vintage .357 Colt Python revolver as his primary sidearm with a 6" barrel. He also had a Beretta 21 Bobcat in .25 ACP at his disposal, which he used to make Kurt and Ram's deaths look like a murder-suicide. 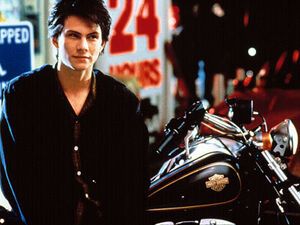 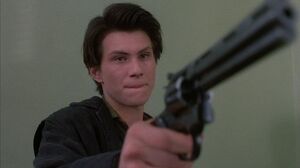 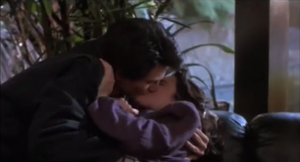 J.D. attempts to rape Veronica Sawyer for trying to break up with him. 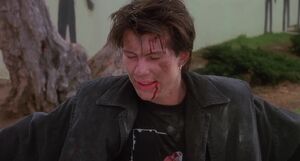 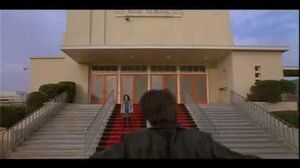