Get Mildred to end her campaign against the Ebbing Police Department (failed).

He is portrayed by Sam Rockwell, who also played Justin Hammer in Iron Man 2, William Wharton in The Green Mile, Billy Bickle in Seven Psychopaths and Eric Knox in Charlie's Angels. For his performance Sam Rockwell won both the Golden Globe and the Academy Award for Best Supporting Actor.

Dixon is incredibly inept, lazy, and incompetent. Despite wanting everyone around him to respect his authority, he has no qualms with abusing his position of power to do what he wants. He is also openly racist, yet expresses great disdain when people call him out on it.

By the end of the film, he has a change of heart after receiving a letter from his former police chief reinforcing his desire to become a detective, going as far to instigate a fight and get mercilessly beaten in order to obtain a DNA sample of someone suspected of murdering the daughter of a woman he despises.

After grieving mother Mildred Hayes rents three billboards (which in sequence read "RAPED WHILE DYING", "AND STILL NO ARRESTS? HOW COME CHIEF WILLOUGHBY") calling out the police department for the lack of progress in the investigation of the rape and murder of her daughter, she immediately causes a riff in Ebbing, the small town she lives in. While many police officers, including chief Bill Willoughby, express sympathy for her, Dixon finds her lack of respect for the police a nuisance, abusing his powers to threaten the agency responsible for renting the billboards, specifically Red Welby, the young homosexual man who rented the billboards to Mildred, later that night Dixon harasses Red in the local bar.

When the local news interview Mildred about the billboards, Dixon's mother tells Dixon to mess with Mildred's friends in return, Dixon does it and arrests Mildred's friend and co-worker Denise on a trumped-up marijuana possession charge and refusing her bail.

After Willoughby commits suicide due to suffering from terminal cancer, Dixon completely wrecked by the news reacts by breaking into the ad agency and viciously maiming the owner and his assistant, brutally beating Red and throwing him out the window, this all witnessed by Willoughby's replacement Officer Abercrombie who shortly after fires Dixon.

The next day his co-worker Cedric tells him Willoughby left him a letter for when he died, that night he goes to the police station for the letter written by Willoughby and look for his missing badge, while hearing music he reads the letter telling him to reevaluate his life if he wants to become a better lawman and achieve his dreams of becoming a detective. At the same time, Mildred, believing Dixon to have burned down the billboards the previous night (it is later revealed it was Mildred's ex-husband Charlie), sets the station ablaze with Molotov cocktails ignoring Dixon is inside. Moved by Willoughby's letter, he decides to change his way of living but realizes to late the station is on fire, Dixon escapes the blaze with burns all over his body, though managed to save the case files on Mildred's daughter, Mildred sees this as James the "town's midget (as Dixon callled him)" puts out the flames on Dixon's body with his jacket.

When Dixon is taken to the hospital he encounters Red in recovery from Dixon's beating, Dixon begs him to pardon him and says he is sorry, despite Red's anger he pardons him. After he is discharged from the hospital, Dixon drinks at a bar where he overhears two men bragging about a rape one of them had committed, the details of which Dixon finds remarkably similar to Mildred's daughter. After getting the man's license plate number and managing to obtain a sample of his skin by scratching his face (which resulted in Dixon brutally beaten), he turns this into Abercrombie the new police chief, who commends him for his efforts. He also uses this time to make amends with Mildred. After it's revealed that the man at the bar was not Mildred's daughter's killer, Dixon and Mildred drive off to the state where the man lives and contemplate whether or not to kill him when they find him. 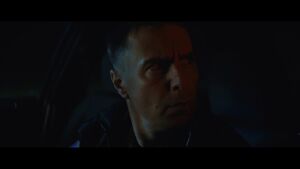 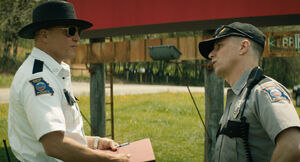 Willoughby an Dixon in front of one of the Billboards 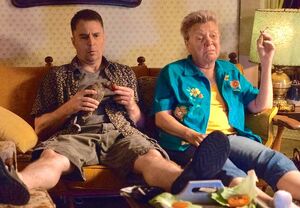 Dixon with his mother

Dixon listening to "Chiquitita" by Abba 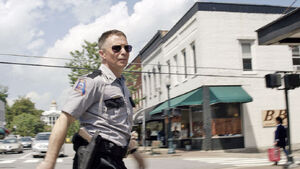 Dixon on his way to beat up Red 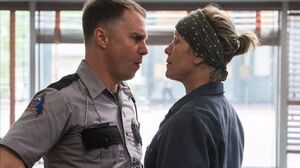 Dixon after being saved by James 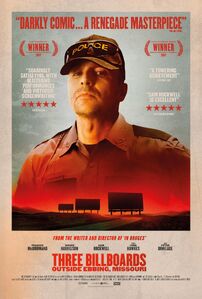 Dixon's promotional poster
Add a photo to this gallery

Retrieved from "https://villains.fandom.com/wiki/Jason_Dixon?oldid=4065748"
Community content is available under CC-BY-SA unless otherwise noted.