Get revenge on the Titans.
Control crime (both ongoing).
Break Scarecrow free from jail (succeeded).

Jason is a brutal vigilante who was the former second Robin, thus making him the second partner of Batman. At the request of Bruce, he was taken under the care of Dick Grayson and became an official Titans affiliate. However, after the incident with Deathstroke, Jason turned his back on the group and was seemingly murdered by the Joker. Later on, however, he resurfaced as the murderous and vengeful criminal known as Red Hood.

He is portrayed by Curran Walters.

Jason was born to Willis and Catherine Todd, who neglected him and left him with his uncle Ray. His mother later overdosed and father was murdered by Two-Face. His uncle frequently took him to bars, but his drunken antics got them kicked out on multiple occasions. Some time later, Ray overdosed, leaving Jason alone to fend for himself. In and out of foster homes, Jason began stealing to survive. One day, he tried to steal the hub caps off the Batmobile. Sensing in the boy a kindred spirit, Batman took Jason under his wing and trained him to become the second Robin.

After Dick Grayson left Gotham City, Batman sent Jason to warn him that members of Haly's Circus were being murdered. When Jason located Dick, he was ambushed by soldiers from the mysterious Organization. Jason assisted Dick by taking down six armed soldiers before helping Dick carry the body of Dr. Adamson to his car. While Jason expressed his passion for being the new Robin they headed to a safe house. Before Dick could depart, Jason explained his true reason for being there, giving him files and autopsy reports that informed him of the death of his circus friends. Shortly afterward, they were joined by Dick's friends, and he met Kory Anders, Rachel Roth, and Gar Logan for the first time.

Finding the location of the remaining circus survivor, Clayton Williams, Jason and Dick headed to Milwaukee, Wisconsin, where they attempted to enter a bar in which Clayton worked. Although Dick was allowed inside, the bouncer automatically recognized Jason's ID as a fake and denied him entry. Despite being told to wait outside, Jason headed around the back and waited by the back door, sneaking in when someone exited to dispose of trash. As he entered, he flirted with some women and headed for the bar. He grabbed a stranger's drink and flirted with her, offering to buy her a new drink. However, her boyfriend took issue, causing Jason to pick a fight with him. Before it could escalate, Dick intervened and there was an explosion that stunned everyone in the location. They exited the bar, where Dick received a call from Nick Zucco, revealing himself as the serial killer responsible for the deaths of the circus mates. Before Dick departed to rescue a now kidnapped Clayton, Jason was given a brief speech on why he should not be Robin.

Despite this, Jason followed Dick anyhow and intervened in a fight between Dick and Zucco. Shot by an acid bullet, Jason made a remarkable recovery thanks to his suit's durable properties. Zucco was defeated, and the police promptly arrived at the scene. Responding to reports of gunshots, they were brutally beaten down by Jason. After severely attacking them, Jason was pulled aside by Dick, who took serious issue with his extreme violence, but Jason brushed it off and left.

With Bruce out of the mansion, Jason chose to entertain himself by riding his motorbike indoors. He was interrupted by Dawn Granger and Hank Hall, who asked for his help to save Rachel and company. Once they arrived at the house, they met Donna Troy and Kory Anders there, who informed them about Rachel, her demonic father Trigon, and his plans to take over the world. Once inside the home, Jason was automatically taken into an illusion, in which Dick killed Batman. Enraged at the act, he and Dick battled it out. As a last resort, he grabbed a loaded, nearby gun, the same one that murdered Bruce's parents, and shot him straight through the head. This caused Jason to be instantly consumed by darkness and fall succumb Trigon's agenda. Possessed alongside the others, including Dick Grayson, Jason was controlled to attack Gar. Ultimately, Rachel managed to defeat Trigon, causing all of the Titans to snap out of their possessed states. Bidding farewell to the others, Jason, along with Dick, Gar, and Rachel headed to parts unknown. They made a quick stop at Bruce Wayne's, where Bruce allowed them use of a Titans Tower so long as they took Jason. Arriving in San Francisco, they acquainted themselves with the old Titans' base of operations.

Living in Titans Tower for the next three months, the newly-formed team began training tirelessly. Using Dick's suggestion of a blindfold, Jason and Gar sparred. However, Jason became annoyed when Gar hit him, leading to Dick stressing the importance of the exercise. That night, the team converged in the living room as helicopters flew past the tower. Turning on the news, they saw reports of a girl named Rose Wilson fleeing from police. With Jason impressed with her skills, Dick went to retrieve her, bringing her unconscious body to the tower to recuperate. Meanwhile, Jason highlighted how they did not know if they could trust her. Wanting to find out who she was, Jason and Gar took her old bandage and analyzed the blood, finding her identity to be that of Rose Wilson, the daughter of Deathstroke.

After spending long periods time in the Tower, Jason and the others continue to adjust to their new home. Jason grows frustrated and impatient in being left out of the fight. He, like the others, try interacting with the newcomer, Rose. After the Titans return from their latest mission against Doctor Light, Jason confronts Dick over their failure, and how they could take him out. Jason gets angry and tries hitting him, but is knocked down in one move. After Doctor Light evades the Titans again, Jason rebels and takes Gar with him to search for Doctor Light by themselves. They both take to the underground sewers. When Jason encounters Doctor Light, he recalls Dick's training and beats him down, only to face Deathstroke, who later kidnaps him.

Jason is held captive by Deathstroke and blindfolded, while being questioned by his captor on being a Titans member, stating that he was being used, like his friends, by Grayson, and will eventually be killed for his ends. Deathstroke later contacts the Titans, stating Jason will be released in exchange for Rose, and he mislead them using Jason's removed tracker. After the Titans arrive, Dick secretly meets with Deathstroke to trade himself for Jason, but he is unmoved, revealing Jason being bound to a set of explosives. Kory comes in, but they fail to prevent the explosives' activation, sending Jason falling.

Jason is unexpectedly saved by Conner mid-fall, who swiftly lands on a car, saving him. Amidst the house, the Titans find several objects implanted in their rooms which bring painful memories, which Jason is accused of, which impacts Jason further after he is dealing over the trauma of the fall. He later trains for stress relief, which Dick confronts him on, and Jason snaps at him. After Jason is feeling the impact of his trauma and the scorn he's facing, Jason contemplates suicide and goes up on the roof to jump, Dick meets him and consoles him over his trauma, and confesses his part of recent events unfolding, saying he's at fault on it, due to his past actions.

After Jason decides he has to leave the Titans, he grows closer to Rose after taking her to his old school and also uncovers her secret after she gets out of Deathstroke's plan, which causes them to become estranged.

After the Titans defeat Deathstroke, Jason decides to leave by himself, and Rachel leaves as well with Donna to Themyscira to resurrect her, and the others form a new team of Titans.

Jason returns to Gotham City, where he begins experiencing nightmares. After one such nightmare, a concerned Bruce awakens him and asks if he's okay before suggesting an old friend of his, Dr. Leslie Thompkins. He goes to visit the Scarecrow in Arkham Asylum. He attempts to pose as a member of GCPD, though Crane sees through it.

Jason is a young man who has a lot of duality to him. Jason has a lot of unresolved anger due to his upbringing and years of familial neglect, therefore, he can be violent and impulsive. He takes amusement in provoking fights and, as shown when fighting cops, has an unrelenting technique to his fighting style. He has a short temper and can sometimes insult people whenever he feels offended or belittled. He does not like being bossed around or told what is best for him, especially if he feels strongly opposed to it. As seen with his interactions with Dick, he is either willing to rebel or disobey orders and do as he sees fit.

Jason has expressed on more than one occasion how much he looked up to Robin as a child. Although he has a lot of respect for his role as Robin, he has some skewed beliefs about the responsibility and sacrifice that comes with it. For instance, Jason loves being Robin, thinking of it as the best job in the world, and believes that Robin has to be a distraction for Batman's enemies. However, he also has the questionable notion that being Robin means he can do whatever he wants, even if it means assaulting people he has issues with.

He can show a playful side, being charismatic and flirtatious. He has flirted before, notably with Dawn. However, he gets a kick out of openly doing it in front of other women's significant others. Overall, he is a thrill-seeker and often has questionable motives when appearing to show a different side to him.

Despite that, he truly feels a responsibility for keeping people safe against enemies who he believes may harm and endanger the public, including his allies. There are times where his pride can get the best of him and get him into trouble. Unfortunately, because of this trait, he once went against orders, allowing himself to become abducted and experience a near-death experience that ultimately traumatized him. After this experience, despite his arrogant behavior, he has revealed to have his limits. He has gotten emotional over numerous false accusations and even contemplated suicide.

After becoming Red Hood, Jason's anger and reckless behavior were taken to their upmost murderous extremes. He became more brutal, sadistic, manipulative, and spiteful in his demeanor. He even went far as to involve civilians in his plans and applied to Hank's empathy in order to plant a bomb into him all for the sake of revenge against the Titans. 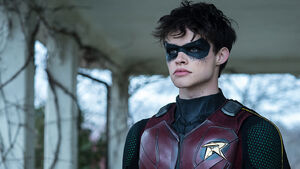