Jason Todd (Under the Red Hood)

Killing professional criminals who do not accept his "offer".

Either force Batman to kill Joker or do it himself.

He is the former Robin who is murdered by the Joker, and becomes a vigilante after being resurrected by Ra's al Ghul. He takes on his murderer's former identity, The Red Hood, and starts "controlling crime" in Gotham City by taking a percentage of drug profits and killing anyone who commits murder or sells drugs to children. This puts him at odds with his former mentor, Batman as he grows to despise him for his moral code.

He was voiced by Jensen Ackles, who also portrays Dean Winchester and Michael in Supernatural, Tom Hanniger in the 2009 horror film, My Bloody Valentine and Jason Teague in Smallville, and Soldier Boy in The Boys.

Before meeting Batman, Jason Todd was a juvenile delinquent, having been arrested at least once. Batman met the boy in Crime Alley, where Jason had just finished removing the tires of the Batmobile as an act of vandalism. Instead of calling the authorities, however, Batman, impressed with the boy and also believing he needed to curb his criminal tendencies, took him in as the second Robin, after Dick Grayson left and made a name for himself as Nightwing.

During one of their first missions, Jason Todd proceeded to aid Batman in taking down the Riddler while the latter was conducting a heist on a museum, also proceeding to supply a "riddle" before taking him down by kicking him in the crotch. They also went to fight together against other criminals like the Penguin, the Scarecrow or Two-Face.

As Jason grew older, however, his personality turned far darker, becoming very cocky and virtually merciless, with him once ruining an operation because, when taking down a drug-dealing pimp, he broke the man's collarbone just enough to put him into shock, which resulted in a stern telling off from Batman due to his needing him for interrogation.

Eventually, Jason Todd and Batman uncovered a crime spree occurring in Bosnia, where the Joker had poisoned an entire hospital and was raiding medicine (in reality a diversion to ensure Ra's al Ghul and his League of Shadows toppled the European Economy). However, Jason Todd's recklessness got the better of him and proceeded to chase after the Joker, which resulted in his capture. Held prisoner by the Joker, he was subject to torture via bludgeoning with a crowbar by the deranged clown, and then left to be blown up by the bomb, which went off just as Batman arrived to rescue him. The explosions ultimately killed him.

However, his body never returned to Gotham: Ra's al Ghul, out of guilt for his unintended role in Jason Todd's death, secretly replaced his corpse with a realistic dummy, and proceeded to use the Lazarus Pit to resurrect him to repair the damage. Unfortunately for Ra's al Ghul, this had disastrous side effects: While Jason Todd's body was resurrected, his mind was left damaged. He then proceeded to escape custody of the League of Shadows, narrowly survived falling into the nearby river from a high drop, and somehow managed to find his way back to Gotham five years later.

Learning that Batman failed to avenge his death at the hands of the Joker, Jason Todd was enraged, and proceeded to adopt the former identity of the Joker, the Red Hood. He then proceeded to take control of the various drug dealers under the employ of Black Mask, allowing them to continue dealing on the streets under the condition that they pay 40% of the shares to him, and they stay away from children when dealing drugs. He also threatens to kill them should they disobey, even producing a duffel bag containing the decapitated heads of their various lieutenants that he allegedly did in under two hours to make clear that his threat was genuine. In addition, he also had Amazo stolen by various hired crooks, although after Batman busted the heist as well as destroyed the Amazo with Dick Grayson, Red Hood proceeded to kill them with sniper rounds. He then escaped via a blue convertible, and managed to lure Batman to the ACE Chemical Plant, where Joker was created. He then reminded Batman that it was his first mistake, possibly even his worst one. He then fled after a brief exchange, also shooting the leaking fuel from the car to destroy the plant to ensure Batman is unable to pursue him.

Meanwhile, he then proceeded to steal another arms shipment from Black Mask (having overheard him via a planted bug), and after Batman interfered, Red Hood proceeded to drop the chopper over the edge, as well as enter a chase by the Dark Knight and Nightwing, eventually escaping at the train station via an explosive and under the cover of a passing train, although not before telling Batman that he hadn't lost his touch while also dropping the name "Bruce" as a hint for the Dark Knight towards his potential true identity. He then proceeded to fight the Fearsome Hand of Four mercenary group, also calling in Batman earlier for aid, eventually managing to knock out three of the mercenaries while killing the fourth. They then proceeded to get into an argument about how to deal justice before taking his leave with a smoke grenade. He then proceeded to use a rocket launcher at Black Mask's office, thus forcing the crime lord to arrange for the Joker's release.

Red Hood then arrived at the area Joker was at, revealing he had in fact intended all along for Black Mask to release Joker, as he wanted to have revenge against him while briefly hinting at their having met before. After Batman prevented Joker from torching the various drug dealers, Red Hood proceeded to abduct Joker before Batman had a chance to retrieve him, and also left a message telling the Dark Knight (who now knows his identity as Jason Todd and how he was revived) that he has Joker and that he meet him in Crime Alley if he wants Joker. He then goes to an abandoned apartment building and proceeded to dish out his revenge against the Joker by beating him with a crowbar, just as Joker himself did to him five years earlier, as well as cryptically stating that the reason they knew each other is because Joker had in effect created him.

He then encountered Batman in Crime Alley, and after fighting him all the way to the apartment complex, Jason Todd proceeded to rant that Batman should have killed the Joker after not only his murder of him, but also all of the carnage that he caused in general. Batman then admitted that he wanted to kill the Joker for what he did to Jason, but decided not to because doing so would only make Batman sink as low as the Joker. Undeterred by this, Red Hood tries to force Batman to either shoot him or let him shoot the Joker. However, Batman refused to do either, and eventually used a Batarang to block out the barrel of his gun, detonating it in his hand after he attempted to shoot him in order to force him to act. Jason Todd then proceeded to set off explosives he had presumably placed in the apartment earlier, although he slumped down when Joker interfered with Batman's attempt to disarm the bombs, although he was nonetheless saved by Batman at the last second, he disappeared. It's unknown what becomes of him afterwards.

Even prior to becoming Robin, Batman already knew how dangerous Jason would be in spite of him shown having great potential like Dick Grayson. Though he and Grayson had similar potential as Batman's sidekick (with Grayson pointed out that Jason was very impressive as Red Hood), Jason had criminal and violent tendencies that Grayson lacks, which disturbed Bruce that he claimed Jason would've become a dangerous criminal had he not recruit him as the second Robin.

Jason was also impulsive and short-tempered, which clouded his judgement in dealing criminals and supervillains alike. Jason proved not to be a complete monster when he ordered the dealers not to give the kids drugs despite being willing to let them continue in exchange for a cut of their money , which shows he would not hurt kids; in fact, Jason was arguably a tragic figure who had endured his brutal torture at the hands of the Joker. Something which figuratively proceeded to haunt Jason for the rest of his life.

Jason's most complicated personality trait is his relationship with his former mentor. On one hand, he still cares about Bruce as he spared his life several times throughout the film. However, he also resents him for not killing Joker, outright accusing him of using his fear of becoming worse than the clown as an excuse for not doing what's right and trying to convince him that killing Joker does not mean he will become no better than him. This results in him almost destroying an entire apartment, so he could either force Batman to kill one of them or end up getting the three of them blown up.

Jason was a superb athlete, in the peak of physical prowess and mentality, making him an agile opponent. He was also extremely skilled and chaotic martial artist, capable of holding his own against somebody as experienced as Batman. He was incredibly brutal in a fight, and used underhanded and sadistic maneuvers against an opponent. However, despite the fact that he was an expert fighter, Batman was older, stronger and infinitely more experienced than him, and was eventually capable of defeating him. Jason had the utterly fatal weakness was that he would let his rage get the better of his judgement and logic. Therefore, Batman easily defeated him once he stopped holding back.

He also carried a variety of weapons and equipment in his arsenals which were guns/pistols, a grappling hook, a combat knife, shurikens, explosives, and a taser. In addition he also wore a full body armor suit when operating as Red Hood. It came with a metallic red helmet with a voice modulator to disguise his voice and a belt to holster his weapons and contains most of his other gadgets. His helmet is also equipped with an explosive. Most of Red Hood's gadgets were in his jacket, which he wore through out during the movie, until Batman used one of his gadgets to burn the jacket. 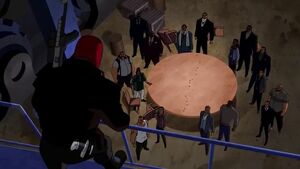 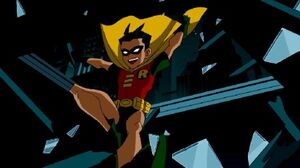 A younger Jason as the second Robin. 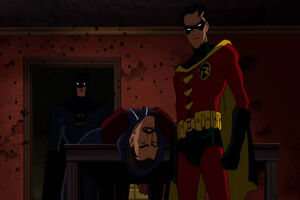 A teenage Jason as the second Robin. 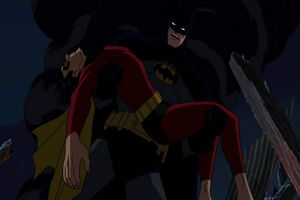 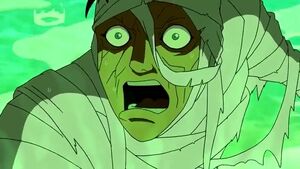 Jason's revival by the Lazarus Pit. 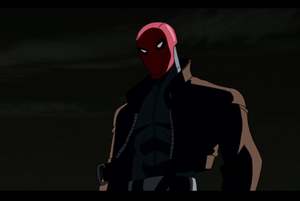 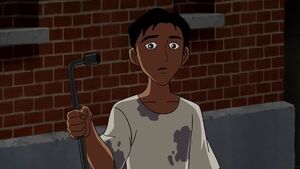 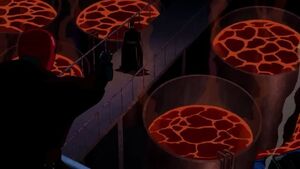 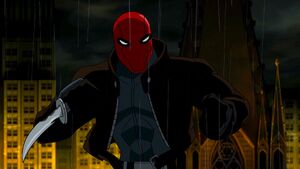 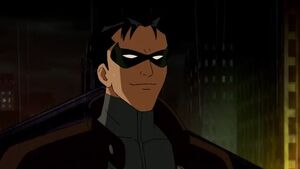 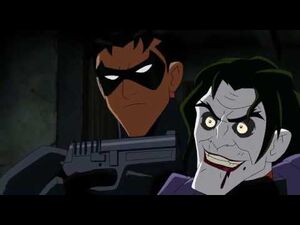 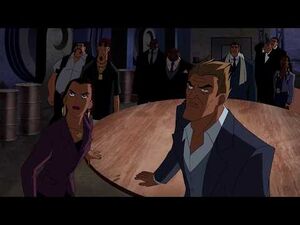 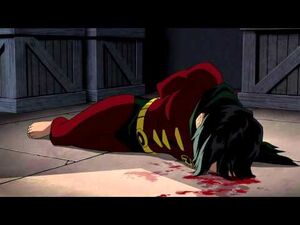 Batman- Under the Red Hood- Death of Jason Todd 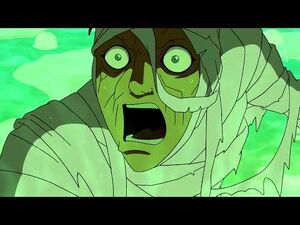