NOTE: This article is about the incarnation of Jason Wynn from the 1997 film. The mainstream version can be found here: Jason Wynn.

Kill Simmons to gain more power and wealth (succeeded for a while).

Take over the world.
Kill both Al Simmons and Clown (both failed).

Jason Wynn is the secondary antagonist of the 1997 film Spawn. Like in the comics, he is the director of the Central Intelligence Agency and was responsible for killing Al Simmons after making a deal with Violator.

He was portrayed by Martin Sheen, who also portrayed Captain Hollister in Firestarter and Greg Stillson in The Dead Zone.

Like his comic counterpart, Wynn is a manipulative, ruthless, and corrupt director that will do whatever is necessary to achieve more power and wealth. However, unlike the original, Wynn is shown more emotion and is more hot-tempered, as he is shown to be saddened by Priest's death.

Wynn is first seen in his office at A-6 Headquarters watching the news about the attack on Hong Kong's airport that was caused by Al Simmons under the order of Wynn. He talks to Clown about the deal they made promising the latter to give him a biological weapon and having concerned agencies from capturing Wynn. Before leaving, Clown orders Wynn to his best soldier Al Simmons. Wynn questions Clown, who throws a tantrum about people always asking 'why'.

Simmons meets Wynn in his office about the airport kill zone was supposed to be clear of civilians, which Wynn replies that it was an unfortunate, but necessary sacrifice. Simmons tries to quit, Wynn gives him his file, listing him as a borderline psychopath and killing machine. Before he arranges for Simmons' transfer, he has him do one last operation: North Korean refinery secretly producing biological weapons and carefully destroy all biochemical viruses.

Once Simmons reaches the biochemical, he sees planned bombs all over the place. Wynn appears and is questions by Simmons. Wynn claims that priorities have changed and that if the virus is the release it would kill 8,000 townspeople. Simmons tries to shoot Wynn but is shot by Jessica Priest. Priest sprays gasoline on Simmons and Wynn throws a cigarette at him, setting the soldier on fire and the plant to explode.

At A-6 Headquarters, Wynn is seen watching the news Terry Fitzgerald talking to XNN Anchor Natalie Ford about the CIA only acts to protect the government's economic interests in the regions of conflict, he reveals to Priest that the Heat-16 is ready and plans to take over the world. After talking to the news, Terry meets Wynn about him lying to the public about their covering up problems with the missions overseas. Terry wants to put a team together to and analyze the field op data. Wynn threatens Terry's family and wants to keep the way he runs the organization and will do what necessary to keep it that way.

At the party, Wynn meets with two men, revealing himself to be a weapons dealer. They discuss the Heat-16 being impressive and problem-free. Terry informs Wynn about a break-in at the A-6's armory. As Wynn attempts to leave the party, Spawn appears from the roof and attacks Wynn. After realizing that Spawn is Simmons, Wynn informs Priest about the situation and orders her to kill Spawn. In the aftermath, Wynn becomes furious at Clown not telling him about Simmons' return. After their conversation, Wynn secretly plans to kill Clown after their deal is done.

Later, Clown convinces Wynn to have a device installed near his heart. If his heart ever stopped, the device will send a signal out to an automated system that will release the virus all over the world.

After Terry sends a copy of Heat-16 to the XNN Anchor Natalie through an email, Wynn takes Wanda and Cyan as hostages and destroys Terry's computer before it could send the email. Clown arrives and informs Wynn of Spawn's arrival.

Once Spawn walks in the living room, Wanda suddenly appears chained up and is held by Wynn with a knife. Forcing Spawn to decide to join Hell's army or let Wanda die, Wynn stabs her in the chest and is thrown out of the way by Spawn. He starts to taunt him about letting her die, Spawn kicks Wynn into another room that Terry and Cyan are being tie up. Before Spawn could have the chance to kill him, Wynn warns him that if he kills him the virus will be released and kill Cyan. Spawn his heart ever stopped, would send a signal out to an automated system designed to release a devastating virus all over the earth.

With his plan falls apart, the deceased Wanda revealed to be Clown disguising as the wife and the whole plan was to have Spawn kill Wynn to start the apocalypse. Once the frustrated Clown attempts to kill both Spawn and Wynn and devoured Wanda, Cogliostro appears and cuts Clown's left shoulder, causing him to return back to Hell. A final battle ensues, ending with Spawn decapitating Violator's head, who threatens his return before being melted and returning back to Hell, Wynn is last seen arrested by Officers Sam Burke and Twitch Williams. 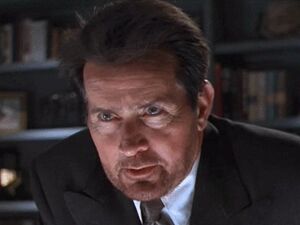 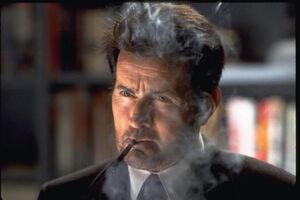 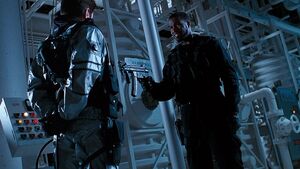 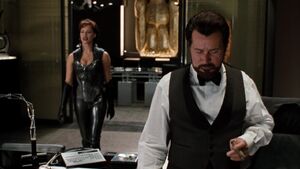 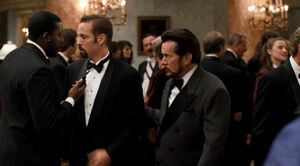 Wynn and Terry trying to leave the party. 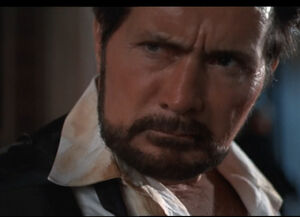 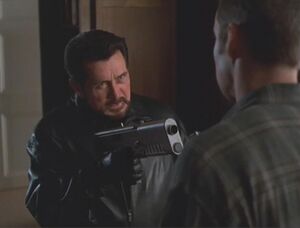 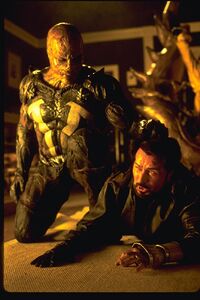 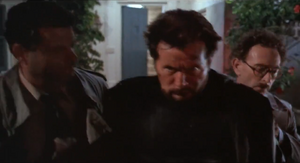 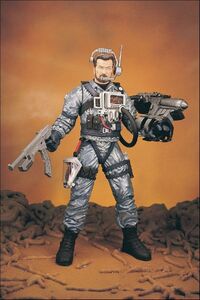 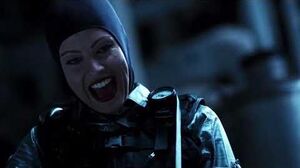 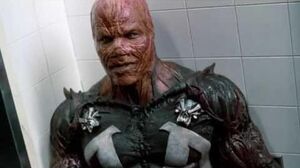