Kill Papa Caesar for abusing him and threatening his sister (failed).

Dr. Jasper Guns, Ph. D., simply called Jasper, is a major antagonist in the video game The House Of The Dead: Overkill, and serves as a boss character. He is also Varla Guns's crippled brother. He is fought at the end of the Papa's Palace of Pain chapter. Unlike most bosses in the series, Jasper isn't named after a Major Arcana tarot card, and neither are the other bosses throughout the game.

He was voiced by Carter Jackson.

Jasper is the crippled sibling of Varla Guns. He is unable to move or speak properly due to a neuron disease. He moves about in a wheelchair since he cannot walk, and has a computerized voice since he is unable to speak. In spite of his disabilities, Jasper possesses a high intellect and aids Papa Caesar by refining the formula. Despite this, Caesar has little to no respect for Jasper, at one point striking him across the face with his cane. Fed up with the constant insults (and Papa Caesar's apparent intentions to hurt Varla), Jasper injects himself with a mysterious formula, causing a startling transformation. It is at this point that G and Isaac Washington enter the scene. Caesar flees the scene, which causes Jasper to instead focus his hatred on the two other men in the area.

The mutation rapidly increases Jasper's brain size, granting him the ability to levitate objects. He uses this ability to its fullest by levitating out of his wheelchair and raising the clutter surrounding him and occasionally throwing it at the agents. Some of these may be hard to see, leading to players getting hit without realizing it. Jasper's weak point is his over-sized cranium, which is usually encircled by debris. After Jasper throws most of the objects surrounding him, his head is vulnerable. When near death, Jasper begins chasing the players around the room; he no longer surrounds himself with a cloud of debris, but simply picks up objects to hurl them at the players. He also attempts to swat them with his oversized hands. Continue assaulting his head, and Jasper will fall.

G and Washington stand over Jasper, who mentions how much it hurts and requests that they tell his sister he loves her. G agrees to this request and tells the mortally wounded mutant that he can ease his pain. Washington is skeptical and demands that they just kill him, to which G replies that was always his intention. Jasper's death is what causes Varla to swear revenge against Caesar and aid the agent and the detective. 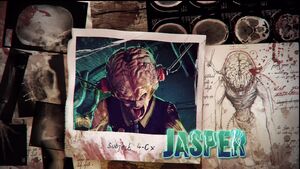 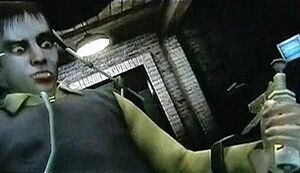 Dr. Jasper Guns in his human form, moments before injecting himself with the formula. 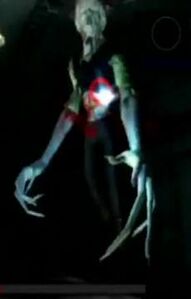 Dr. Jasper Guns in his hideous, mutant form.
Add a photo to this gallery 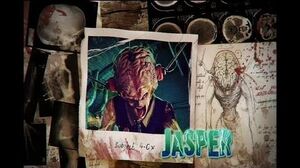 The House of the Dead Overkill - Boss Fight Jasper - PS3 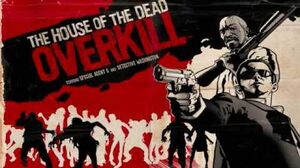 Retrieved from "https://villains.fandom.com/wiki/Jasper_Guns?oldid=3237010"
Community content is available under CC-BY-SA unless otherwise noted.