Jasper the Douchebag Ghost is a character on Robot Chicken, and is the brother of Casper the Friendly Ghost. Unlike Casper who is nice and kind and wants to make friends, Jasper is a complete bully who likes being mean to people by hurting and cursing at them.

He was voiced by Paul Rudd, who also played Vinz Clortho in Ghostbusters: Afterlife.

Japer comes to a man, who mistakes him for Casper the Friendly Ghost, and pulls his pants down pointing at his genitals saying, "Someone call UPS! There's a small package that needs to be delivered!" The man, pulling his pants back up, gets upset saying that he thought Casper's supposed to be a friendly ghost, but Jasper rudely corrects him saying he's his brother, Jasper the Douchebag Ghost.

Jasper starts doing other bad things like calling a handicapped child names making him cry and stealing and old woman's walking assistance, making her fall down, and laughs at her. Then he goes off to a funeral and possesses the deceased body of an old woman named Annie. This shocks everyone thinking Annie's alive, and her grandson named Herman comes to give her a hug happy that she is "alive".

Jasper in Annie's dead body pats Herman's shoulders saying "Herman, you were always my least favorite grandchild.", and then he comes out of the body by surprise making it drop on Herman laughing at him, calling him a retard. Then he flies off after everyone at the church started to berate at him.

He'll call you names and act real mean until you feel depressed.

He's so damn crude and so damn rude, 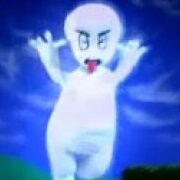 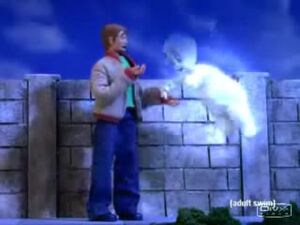