Member of the Brotherhood of Shadows

Jataaka is a minor antagonist in Mortal Kombat Mythologies: Sub-Zero. She is an assassin and member of the Brotherhood of Shadow within the Netherrealm where she serves both the necromancer Quan Chi and the dark Elder God Shinnok. She works with her two fellow demons Sareena and Kia who are also assassins from the Netherrealm.

Jataaka, Sareena, and Kia notice Sub-Zero in the Netherrealm. They are surprised to see a mortal. Jataaka mentions that a mortal cannot exist in the Netherrealm unless he or she is tainted with evil. Sareena decides to inform Quan Chi while the other assassins stay to monitor Sub-Zero's progress. Sub-Zero continues traveling through the Netherrealm where he reaches the Pyramid of Shinnok until he encounters Jataaka.

She guards one of the 3 crystals that allow access to Quan Chi's secret sanctum near the apex of the pyramidal temple. Sub Zero is forced to fight her for the crystal. She utilizes martial arts and a sword that shoots lasers. He manages to defeat her and collect the crystal before continuing his journey. Somehow, Jataaka manages to survive.

Jataaka, along with Sareena and Kia, reappear in Mortal Kombat: Armageddon. They are in the game's Konquest mode. The assassins still serve Quan Chi and Shinnok. Together, they battle Taven in the Red Dragon Clan's cavernous lair. He manages to defeat all of them. 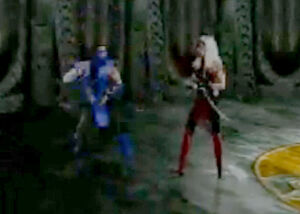 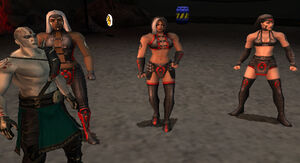