He was portrayed by Tom Bell.

Jathro was a male Nekross who along with the Nekross King, Varg and Lexi travelled around the universe in their spaceship the Zarantalus to find magic to devour. The magic would then be sent back to the other Nekross on their home planet Nekron. Due being in Technician Class and not a Royal, Jathro wasn't allowed to enjoy magic for himself. The Nekross eventually reached the last planet to have magic; Earth. However, a 16-year-old wizard named Tom Clarke vows to not let the Nekross take Earth's magic.

In Series 2, it was revealed that unknown to the Royals, Jathro was secretly planning with his mother Chancellor Kooth (who was ruling Nekron in the King's absence) to destroy Earth, take Magic from the Neverside and then overthrow the King and rule Nekron. Upon arriving on the Zarantalus, the Chancellor convinced the King to have a Contest of Devourment in which Varg and Lexi would complete to capture Tom Clarke with the loser being eaten by the King. However this was actually a distraction for Jathro to steal the Catromister Quatrozeen, so the Chancellor had control over an armada of Nekross ships. This plan failed and the Chancellor was eaten alive by the King whilst Jathro and his army were swept away by Tom after he became powerful after drinking raw magic.

However in the Series 3 episode The Quantum Effect, it was revealed that Jathro survived by leaving in a escape pod and landed on Earth. He used a form filter to take on the form of a scientist named Adam Wright and went to the Brook Mill radio telescope and put the scientists there under a trance. He wished to get the Quantum Light in order to equal his genius and bring Earth to it's knees as revenge for being bullied all his life and treated like a fool and planned to create a superstorm on Earth. This plan failed however when Benny sent the Quantum Light back into space before using a tracker bug (which the Nekross used to track wizards and teleport them to the Zaratulus) to send Jathro (who joined forces with the Royals again) along with Varg, Lady Lyzera and their guards back to the Zarantulus. Back on the ship, Jathro was brought forward to Varg and Lyzera be dealt with for his earlier betrayal, where Lyzera suggests making Jathro a jester to her pet bird Eelix whilst Varg suggest that Jathro should be bird food.

In the episode The Key of Bones, Jathro is ordered by Varg to find out why the magic being stored on the Zarantulus is disappearing and comes across Lyzera's Sorceress Zone and sees her using magic to communicate with Tom's grandfather Simeon Swann in his dreams. He meets with Varg and tells him that Lyzera is a sorceress but Varg believes he is lying and brings him to Lyzera who says that Jathro is insane and he is taken away by the guards. Later Jathro makes a clone Key of Bones out of a piece of the original that Lyzera took. Lyzera then asks Jathro to feed Eelix to which Jathro tells her that there are no beatroo bugs left to which Lyzera kills him by turning him into beatroo bugs as punishment for betraying her and feeds the bugs to Eelix.

Jathro has red skin with two antenna. He wears blue armour with spikes on the shoulders with a black waistcoat.

Jathro with his mother Chancellor Kooth. 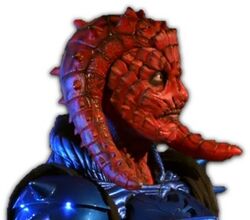 Retrieved from "https://villains.fandom.com/wiki/Jathro?oldid=2144834"
Community content is available under CC-BY-SA unless otherwise noted.