Defending Bill Williamson while he is in Mexico.

Javier Escuella is a central character and a major antagonist in the videogame Red Dead Redemption. He is also a supporting character in it's prequel, Red Dead Redemption II. He is a former member of the Van der Linde gang alongside John Marston. Javier is responsible for defending Bill Williamson in Mexico. He is noted as one of the few Mexican characters that speaks English without a strong accent.

With the addition of the Myths and Mavericks DLC pack, Javier is also a multiplayer character that can be selected in the section of the Outfitter.

Javier Escuella was born in Nuevo Paraiso and was once a Mexican bounty hunter. According to Allende, Javier's father was a drunkard that worked on Agustin's uncle's land.

After spending some time in America, Escuella became a member of the Van der Linde Gang. When the gang was disbanded after Dutch van der Linde went insane in 1899, Javier took it easy and returned to Mexico to work as a hitman for Allende. John Marston is then forced to pursue him in 1911 along with Javier's friend Bill Williamson.

When John Marston hunts him down throughout Mexico, Javier takes refuge throughout the countryside in various forts, staying reclusive. After Allende's betrayal, Javier is eventually caught by John, who has help from Rebel bastards. Javier has been hiding in a fort surrounded by his fellow henchmen, but John breaks in with the help of rebel friends and the two confront each other in a storage closet. John points his revolver at Javier.

The two have a conversation with each other, with Javier slowly inching his way over to John. Javier waits until John is distracted, and then he pushes a crate on John. Given some time, he jumps out a nearby window and onto a stairs. Javier calls out to John, saying he was "always the weak, the bad, and the ugly!" and then rides out of the fort with a horse. John runs after him, and then John can do one of two things; he can either kill or capture Escuella. 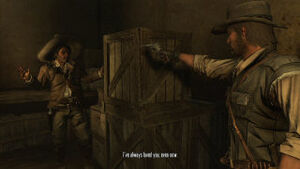 John pointing his gun on Escuella. 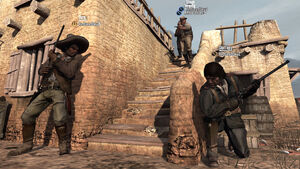 Javier, along with De Santa, is trying to kill Deputy Eli, and Drew MacFarlane. 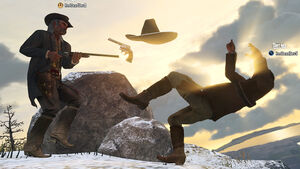 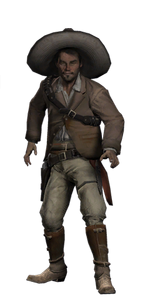 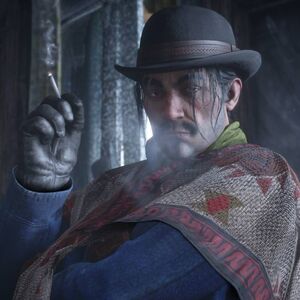