Villains Wiki
Register
Don't have an account?
Sign In
Advertisement
in: Mature, Male, Call of Duty Villains,
and 23 more
English

Chief Petty Officer Javier Salazar is a major antagonist in the 2012 video game Call of Duty: Black Ops II, and appears as a featured character in Call of Duty: Mobile.

While he appears as a friendly character for most of the game, he reveals his true colors as a mole working for Cordis Die during the campaign level "Odysseus". He accompanies David Mason (Section) throughout most of the campaign and was a member of his team, and his fate is left up to the player depending on their choices in "Achilles Veil".

He was voiced by Celestino Cornielle.

Salazar was born in Nicaragua in 1980 during Menendez's initial rise to power. He eventually grew up to enlist in the United States Armed Forces and made it into JSOC as part of SEAL Team Six and became an American special forces operative. At some point in time, he was assigned to a team comprised of David Mason, Mike Harper, and Crosby and became one of the team's members. Due to his background, he became the main source of knowledge about Raul Menendez for the team as a whole, but at some joined he became a mole for the Cordis Die since he believed in Menendez's goals. Though he became friends with his teammates, they were oblivious to his true allegiance.

He first appears where he's sent to Myanmar where he and his team are to assault a Cordis Die facility deep within the mountains.

The mission is a success and they locate the base and find the Celerium, a rare earth element and a weapon that's designed to eliminate all micro-electronic technologies which would render the United States Military obsolete. Later, he appears where he's sent to Anthem in Pakistan to locate Menendez and acquire more intel on him as well as DeFalco, Menendez's second-in-command. Section and Harper are separated from Salazar and Crosby as they split up to locate Menendez with the team eventually finding about information about how influential Cordis Die is and how they plan to take down the two superpowers, the United States and China. Salazar later escapes Anthem in a car chase after Menendez finds out about the mission and compromises the entire operation.

Salazar and his team are then sent to Colossus, a floating city, where he's to find out where Karma is. During the mission, Karma is actually revealed to be a woman named Chloe Lynch, a former employee of Tacitus, and is the primary target for DeFalco on the city. A firefight eventually breaks out and the outcome will vary on the player's actions overall on whether or not Chloe is saved in time. The information about the Celerium is then uncovered where it is revealed that it is a cyber-weapon and it plans on being used to take out both the United States and China at the same time in a single cyber attack, effectively crippling the two superpowers at once.

Menendez is later captured during a joint Yemeni-American military operation in Yemen which results in his capture and is sent to the U.S.S. Barack Obama where Salazar is sent to as a guard of Menendez, but also to aid in his master plan. The Obama is raided and during the attack, Salazar is at a control room where he betrays his American allies and has Menendez hack into a take over the American Drone Fleet to use it against the capitalist governments of the world. Afterwards, he surrenders and Salazar is captured where the following outcomes are possible;

Salazar is a quietly spoken individual who never rose his voice to that of fury at anyone. He was a humble man who spoke in a moderate and regular tone. Beneath all of that however, was a sense of distraught with the capitalist governments that he served and fought for. He despised such regimes and was sympathetic to the cause of Cordis Die even going as far as to enlist in the United States Military just to help them gain the needed resources for the global revolution. Salazar retained a sense of honor however when he willingly surrendered after handing over the entire American drone fleet to Menendez and even wanted to keep his former superiors alive. 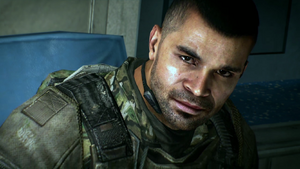 Salazar in the opening cinematic of "Old Wounds". 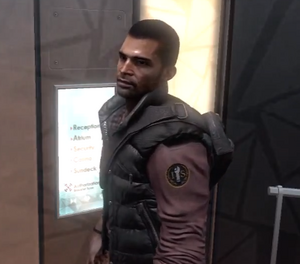 Salazar in the Colossus elevator. 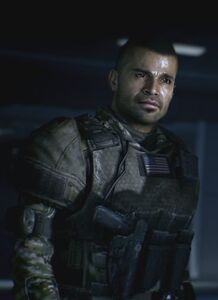 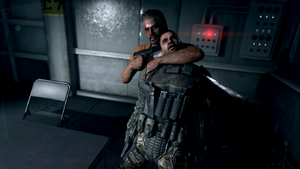 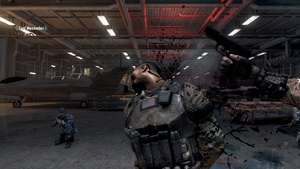 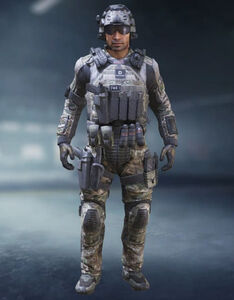 Salazar in Call of Duty: Mobile.