A aquatic shark villain hail from the ocean planet Scylla, he escape in the Breakout event and returns to his homeworld. Scylla is completely full of water and various of underwater species thrive in it and special equipment to walk and swim on it.

He frequented at the fueling station where Splitface inform him about Voltix's captured by the Hero Factory. Shrugged off his warning, he and Toxic Reapa going to a museum by going through a sewage channels into a aquarium in the museum. He stayed in the tank and Toxic Reapa stealing the gems, both are ambushed by the Heroes (Jimi Stringer & Dunkan Bulk). He imprisonment with Thornraxx, Splitface and Speeda Demon when Black Phantom forms a alliances together and formingthe Legion of Darkness. He and the others escaped the Asteroid J-54 prison, preparing their revenge on Hero Factory.

Planning to attack Hero Factory, he shown a map of water system leading into Hero Factory by XT4 and memorized the information. Black Phantom drops him above Makuhero City into the sea and swam up the tunnel until encountering the wires powering the external defenses, he bite them and keeps shock by voltage of the wires and into making him unconscious for a few seconds. He keeps on biting them so his legion allies can proceed with the plan. With the Legion's plan fail and dragged into a Hero Craft, back at the Asteroi

d J-54 prison again and later escaped again. He later encounter a young rookie Hero (Wiiliam Furno) and stoles his Dual Fire Shooters, converted it into his new Magma Blades for his personal use. Furno defeats him and bring him to Villain Storage.

When Voltix help Von Nebula freed all the Villains, he escape and he gets into a fight with Preston Stormer. Seeing Stormer distracted, he escapes to Von Nebula's vortex and heading back to Scylla. He starts on collecting all the naturally occuring substance called "Oxidium", a fast acting rusting agent that can rust any Heroes and using it as his weapon. When founded by Furno's 5.0. Mode, he battles him and sees a Oxidium on the sea floor. He through it at Furno and immobilized him, he prepares on shredding him into chum and Furno shoot a harpoon into his jaws. Furno use Hero Core to re-energized his body and armor, he crushed the Furno's harpoon and swims towards Furno, Furno use his harpoon with the Hero Cuff a attach to it and cuffing Jaw-Blade's hand and tail. Once again captured by Furno and heading to Villain Storage.

A agile aquatic denizen with firece temper, extremely fast in water and great memory of skills. He is capable of walking on dry land with awkward waddling that can anger him greatly and powerful crushing jaws of shredding the toughest materials. His tail harness jet propulsion greatly enhanced his speed underwater. Later, he outfiited. Using Furno's stolen Dual Fire Blades, he modified into his own "Magma Blades" for personal use. 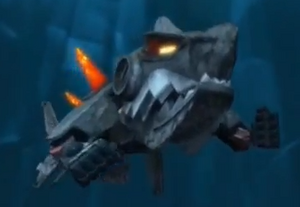 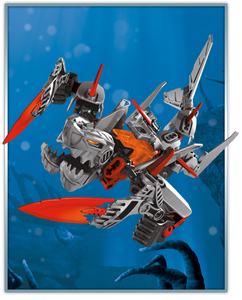 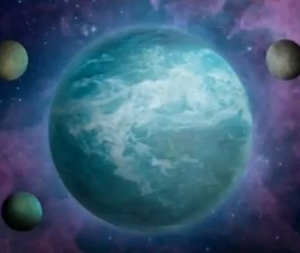