Jackson Nathaniel "Jax" Teller, better known as Jax Teller, is the main protagonist and anti-hero of the FX TV series Sons of Anarchy.

He was portrayed by Charlie Hunnam.

In his early-mid 30s, Jax is tall (over 6 foot), handsome, physically fit and has blonde hair that has changed lengths throughout the series, and he commonly keeps a small beard. He has a number of tattoos, most notably his Club's Reaper logo on his back, a tribute to his father John Teller on his right arm, his son Abel's name on his chest, and his second son, also the name of his deceased brother, Thomas on his left arm. On his kutte, he wears breast patches reading "President" and "Men of Mayhem" on the right, "Redwood" and "Original" on the left. He wears a side rocker patch reading "SAMCRO" and a small memorial patch for his deceased best-friend Opie. He commonly is seen wearing flannel and plaid type long-sleeved shirts, black and navy blue hooded sweatshirts, as well as t-shirts and hats bearing his Club's logos and subculture (SAMCRO, Reaper Crew etc.). He usually wears white Nike Air Force 1 sneakers, jeans, a custom SAMCRO belt-buckle and carries a USMC KA-BAR fighting knife on his belt, possibly his father's service knife.

A born, brave, and beloved leader, Jax is extremely loyal to his Club. However, he finds himself doubting SAMCRO's outlaw violence and illegal business-oriented direction, growing weary of all of the problems and stress associated with the lifestyle; which causes tension between him and then Club President, Clay Morrow. However, Jax remains loyal to his comrades, always doing his best to keep his brothers out of trouble and to make the best decisions for the Club. Realizing leading SAMCRO is his destiny, something he later admits to never really wanting, Jax attempts to lead the Club away from all of the relationships and activities that cause so many problems for him, his family and his brothers. Very close with his mother, Gemma Teller Morrow, she commands a powerful influence over him.

Jax is also a smart businessman and a skilled tactician. He has extensive knowledge of the area within his Club's outreach, and as such must remain stern and smart to keep on terms with rival and ally gangs and organizations in areas surrounding Charming. A brawler, Jax is an adept street fighter, usually opting to try and resolve conflicts before they must be settled by fists, but when the need does arrive, Jax is quick to the fight. He, along with the majority of SAMCRO live by a code of outlaw justice, opting for an "eye or an eye" mentality, usually resulting in using violent and aggressive actions. He is also a trained and skilled marksman, having been seen operating a multitude of firearms with deadly affect. His skill set, leadership abilities, and loyalty command him respect from both allied and rival gangs and leaders such as the Mayans Motorcycle Club President Marcus Alveraz, leaders of White Supremacy groups, One-Niners leaders Laroy Wayne and later Tyler, king-pin gangsters Damon Pope, August Marks and Henry Lin, as well as high-ranking IRA members, Galindo Cartel members, Aryan Brotherhood members, his fellow SoA members, gangster and business partner Nero Padilla and even various current and former law enforcement officials. His brothers in SAMCRO are all completely loyal to him, trusting him without a doubt and some, specifically Chibs Telford and Bobby Munson, do their best to guide him. He was closest to childhood friend Opie before he is killed; an event that changes Jax indefinitely.

Despite this, the vision he has for his Club, one of legitimate business and an end to unnecessary violence, finds itself put to the side in lieu of a plethora of problems and violent occurrences that plague SAMCRO. The anarchy, brutality and multitude of problems and hardships Jax faces begins to turn him into a cold, ruthless, and stony-hearted killer. Having been transformed away from his "Brains Before Bullets" mentality in season one, Jax soon becomes explosively violent, something ally and enemy alike take note of, as well as his childhood sweetheart and beloved wife Tara Knowles, who tells him he's become a "monster". By season seven, Jax's kill count numbers over forty as he displays increasing levels of mayhem and violence in the wake of Tara's murder and his Club's conflict with powerful organized crime groups.

Jackson "Jax" Teller is the son of Gemma and John Teller and was born in 1978, and raised in Charming, California. He lives with a genetic heart disorder ("family flaw" as Gemma calls it) that his brother Thomas "Tommy" Teller (January 8, 1984 – April 4, 1990) died from at the age of six. His father, the founder and President of SAMCRO died in 1993 and his mother was re-married to Clay Morrow, who then became President of the Club. SAMCRO being the only thing he ever wanted to become a part of, Jax drops out of high school to fulfill his legacy and begins prospecting with the Club along with his lifelong best-friend Opie Winston, son of Club co-founder Piney Wintson. They both become fully patched members of SAMCRO in 1995. At some point, Jax assumes the role of Vice-President of the Club until finally becoming President in 2011. Jax also works as a mechanic at Teller-Morrow Automotive Repair, his father and Clay's business. He has served time in prison for smuggling and gun-running, his last arrest was in 2012. Living out the outlaw motorcyclist lifestyle, Jax claims to have slept with over 100 women, but after becoming lonely, he married a woman named Wendy Case, but filed for divorce because of her drug habit. After Wendy got clean, they reconciled and conceived a son, Abel. Overwhelmed by the idea of being a father and tired of fighting with Wendy, Jax leaves his pregnant wife, allowing her to continue to live in his home while he moved into the clubhouse. Left on her own, Wendy begins using again and winds up overdosing. Abel was born 10 weeks premature and addicted to crank in the pilot episode. In season 5, Jax married his high-school sweetheart and the love of his life Tara Knowles and who is mother of his second son, Thomas.

Having discovered several of his father's old journals and an old manuscript titled "The Life and Death of Sam Crow: How the Sons of Anarchy Lost Their Way", which collectively lay out the original manifesto for SAMCRO, he finds himself doubting the Club's direction, causing friction between himself and his stepfather Clay, and spreading doubt among the other members.

In the series finale "Papa's Goods", Jax sets up a better life for Wendy, Abel and Thomas by having Nero take them to his farm outside of Charming and selling all of his possessions in order for Wendy to have the money she needs to support his sons. Jax also visits DA Tyne Patterson and confesses that Gemma was the one responsible for killing Tara and that Juice killed Eli Roosevelt. Off-the-record, he gives Patterson the address to find Wayne Unser and Gemma's bodies (although he does not mention they are dead) and assures her that the bloodshed will be over by the evening. He first stops at Barosky's bakery and shoots him in the head (as Barosky ratted out SAMCRO to the Chinese, causing the death of Orlin West) and then disguises himself in a blanket and murders August Marks while on the courthouse steps (to finally avenge Bobby Munson's death). Although the other SAMCRO members vote to unanimously kill Jax, he decides not to put them through that and plans to go out on his own terms with the other members covering for him and saying he got away during a scuffle. Jax drives his father's motorcycle to the same highway where JT had died and pays his last respects. With the cops hot on his trail after Althea Jarry places an APB on him for the double homicide of Unser and Gemma, Jax rides down the highway and upon noticing an oncoming semi-truck (driven by the same trucker Gemma had become friends with), Jax takes his hands off the handlebars and rides the motorycle veer right into the path of the semi, committing suicide. 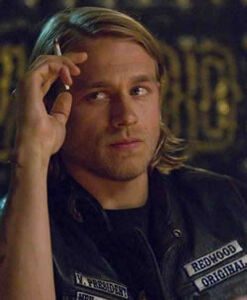 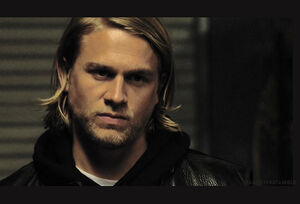 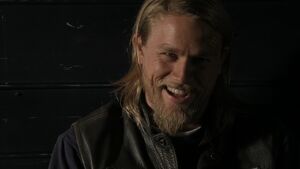 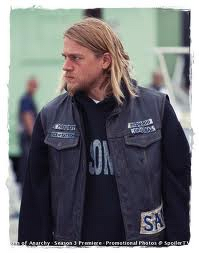 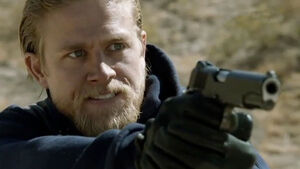 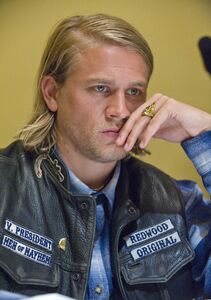 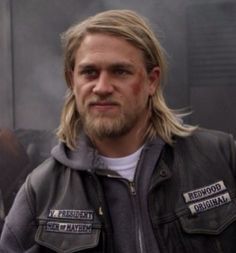 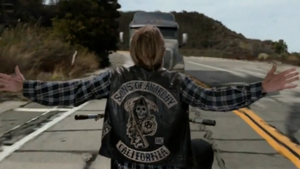 Jax's moments before the collision that would end his life.
Add a photo to this gallery

Retrieved from "https://villains.fandom.com/wiki/Jax_Teller?oldid=3774087"
Community content is available under CC-BY-SA unless otherwise noted.