Throwing parties.
Being with Daisy and Nick.

Get Daisy to leave Tom for him (failed).
Take the blame for Myrtle's death (succeeded).

Jay Gatsby, formerly known as James Gatz, is the titular deuteragonist of F. Scott Fitzgerald's most famous work The Great Gatsby. He was a self-made businessman (who started off poor) that made his wealth in bootlegging in order to impress Daisy Buchanan with his great wealth in hope that she would be his again.

Gatsby's character became a character archetype when describing a self-made man who dreams of wealth and social status and he also became the inspiration for other wealthy characters with mysterious pasts. Unlike Tom Buchanan, he isn't outright villainous and is more of an anti-hero due to the process with how he gets his money.

Unbeknowst to others, Gatsby actually started out poor. In fact, his name wasn't even Jay Gatsby at all; it was James Gatz. He was born on a farm in North Dakota, and, because of this, he was discontent with his life. When working on the docks, he spotted a yacht that belonged to Dan Cody, a wealthy copper mongul, and soon he began to go around the world with him and James created his new alter-ego Jay Gatsby because of this experience. After Dan died, Gatsby was supposed to receive the beneficiary, which was $25,000. However, he was swindled out of the money because of Cody's mistress. Since then, he vowed to become successful and rich no matter what cost.

When he was about to leave Louisville to fight in the Great War, Gatsby met Daisy and fell head-over-heels in love with her. However, he couldn't marry her because he didn't have any money, and asked her to wait for him. She ends up marrying Tom instead. Gatsby then moved to West Egg, Long Island, and built his mansion there in hopes of reuniting with Daisy. He was in love with the idea of her and wanted everything to be like it was those many years ago.

He later gets in a fight with Tom Buchanan over Daisy at the hotel. Gatsby hoped that Daisy would leave Tom, and make his dream a reality, while Tom reveals to Nick, Daisy, and Jordan that he did some research on this fellow and discovered that he got his wealth through illegal means such as bootlegging and selling drugs. When Daisy heard this, she was in denial, and she sides with her husband, leaving Gatsby's dreams crushed and in the dust. Still not willing to give up on Daisy, Gatsby takes the blame for her when she accidentally runs over Myrtle, and watches through the window at Daisy and Tom when they were sitting down eating cold chicken.

The next day, Gatsby decides to take a dip in his pool before it's drained for the season while waiting for the phone to ring. While waiting for the phone, George Wilson, husband to the deceased Myrtle, shoots Gatsby, instantly killing him, and then ends his life by pulling the gun on himself. This came about because Tom convinced him that Gatsby killed his wife, as a means to rid himself of him. Gatsby's funeral is attended by Nick, Owl-Eyes, and Gatsby's father, who had gotten the news that his son was murdered. To make matters worse, Tom gets away with both Gatsby's and Wilson's deaths, and he leaves with Daisy and their daughter to Chicago. Nick is so disgusted by all that's happened that he severs his ties with them and leaves. Gatsby ultimately died because he desired something that he could not have.

Gatsby was a very mysterious individual who seemed to get his money in unfathomable ways. He associates himself with the likes of Meyer Wolfsheim, who is a gangster who was believed to have fixed the World Series of 1919. He also was very inarticulate, secretive, and taciturn about his life.

He would tell things that were blatant lies with little tidbits of truth in them. He was also very obsessed and passionate with Daisy, so much so that he went into bootlegging to get rich just for her. He also seemed to be socially awkward and uncomfortable, since he accepted an invitation to a party, even though he never really wanted to go to the party with the owners.

He was also extremely optimistic to the point he believed that he could change his past with Daisy, which both delighted and disgusted Nick at the same time.

Gatsby himself became a go-to figure for shady business owners and his story was regarded as a deconstruction of the American Dream itself due to his position as a bootlegger and how he wasn't able to win Daisy over in the end. While many who read the story see only the life Gatsby built around his image, the truth is that Gatsby's undoing was letting his self-made image of others rule his own life. 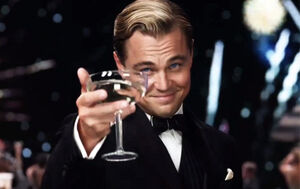 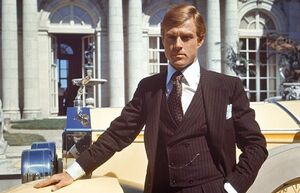 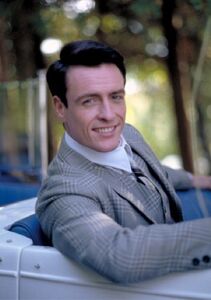 Jay Gatsby on the Heroes Wiki