Jayme Jameson is a villainous professional wrestler competing in the Shine Wrestling promotion.

Jayme debuted for Shine Wrestling at their first IPPV on July 20, 2012, losing to Reby Sky. She defeated Mercedes Martinez at SHINE 3 and also defeated Brandi Wine at SHINE 8 in March 2013. Jayme returned to Shine Wrestling at the SHINE 21 event on August 22 and served as one half of the tag team known as BTY (standing for "Better Than You"). She teamed with Amanda Rodriguez, who filled in for her regular partner, Marti Belle, and was defeated by The Buddy System (Solo Darling and Heidi Lovelace).

After their loss, the evil Jayme blamed Amanda and attacked her. Jayme and Marti officially debuted their new team and also joined SoCal Val's new stable, Valifornia, along with Nevaeh at SHINE 22. At the event, Jayme, Marti, and Nevaeh defeated Kellie Skater and the Lucha Sisters (Mia Yim and Leva Bates).

Jayme and Marti engaged in a feud with The Buddy System after they cost them the SHINE Tag Team Championship against Legendary (Malia Hosaka and Brandi Wine). The duo defeated Solo and Heidi at SHINE 23 on December 5, and later brutally attacked and injured Heidi after their victory.

As a villainess, Jayme is portrayed as arrogant and a bit of a bully, often using her strength and physique as an intimidation factor towards her opponents. 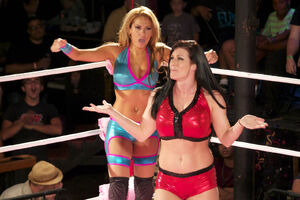 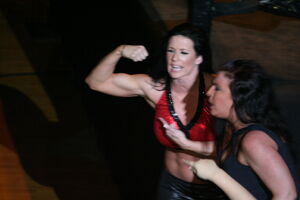 Retrieved from "https://villains.fandom.com/wiki/Jayme_Jameson?oldid=2578480"
Community content is available under CC-BY-SA unless otherwise noted.