Villains Wiki
Register
Don't have an account?
Sign In
Advertisement
in: Greedy, Cartoon Villains, The Amazing World of Gumball Villains,
and 27 more

Separate Leslie from Penny (when he's in Gumball's possession).

Kill Gumball and his friends (when he is exorcist-ed from Gumball's body).

Jealousy is the main antagonist in The Amazing World of Gumball episode "The Flower". He is the embodiment of everyone's envy and controls the person with envy until they are satisfied with there self.

He was voiced by John Kassir, who also played the Crypt-Keeper in the Tales from the Crypt franchise.

Jealousy first appears when Gumball sees Penny spending more time with Leslie than him. Jealousy than plots to separate Leslie from Penny through various attempts that failed. On one of his attempts to place a stolen trophy which he recently stole in Leslie's locker which he pried with a crowbar to get open. Penny insists Gumball try to make amends with Leslie to which he agrees. Although it is revealed Leslie and Gumball have a lot in common, Jealousy uses the opportunity by gluing him to the bench and drops snails and other herbivorous insects upon him and leaves him for dead.

Jealousy's plan was seemingly a success but Leslie had survived and called Gumball out in front of Penny. Jealousy immediately pounces on Leslie and rips out his petals. Darwin and Penny stop Gumball and see no trace of him under the influence of Jealousy and Carrie formulates a plan that will expel Jealousy from his body. In Carrie's house she surrounds him in a circle of pepper to keep him from hurting anyone. Carrie has Leslie, the root of his jealousy to take a step forward and for all to chant Jealousy begone Jealousy is successfully expelled from his body and his purest form is revealed. Penny walks up to Gumball to comfort him and crosses the circle of Pepper, thus causing Jealousy to roam freely trying to possess anything he can.

Leslie is the first to be possessed complaining that he wishes he had his own bedroom, like Carrie and possesses her. Now as Carrie Jealousy wishes she had her own body, like Darwin. As Darwin Jealousy tries to find anything he envies only to find out he is happy with his life as it is and relinquishes him. Believing Gumball has betrayed him he decides to explode himself. Carrie tells Gumball that in order to stop Jealousy he would have to stop being Jealous, but he says he can't until Penny breaks up with Leslie and she clarifies they weren't dating, but were cousins, thus causing Jealousy to be disarmed. Jealousy is at first presumed dead but when Carrie distributes an affectionate punch in the arm to Gumball, Jealousy either survived the explosion or was reborn in the form of Penny's Jealousy giving Carrie a detailed insult.

Jealousy appears as a lime green ghost that is almost shaped like a cloud. It has an angry expression that is detailed with dark green. It also has a skeletal-like mouth.

Whenever it corrupts a person, the host's skin will turn green and there scelera turns yellow.

Jealousy is an embodiment of everyone's envy. It controls the person with envy until they are satisfied with themself. 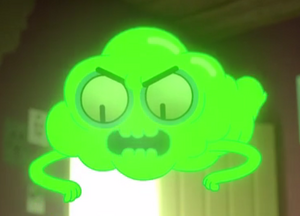 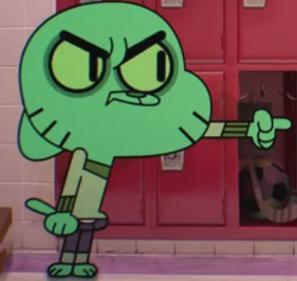 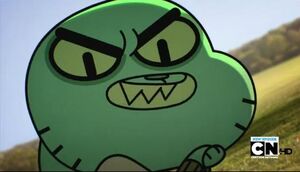 Jealousy's evil grin while he is under the control of Gumball. 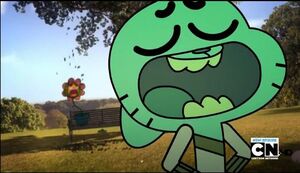