Kiss of the Dragon

Kill Liu Jian in order to prevent him from obstructing his nefarious activities.

Keep Jessica under his prostitution work and kill her daughter (all failed).

Inspector Jean-Pierre Richard is the main antagonist in the 2001 French action/thriller film Kiss of the Dragon. He is for all practical purposes, a thug in a badge whose indiscriminately trigger-happy tendency is a danger not only to his targets, but to his own men as well who often gets caught in a crossfire between him and Liu Jian, his Chinese target. Richard also never takes no for an answer when he fatally shoots his minion for questioning the sanity of his orders.

He was portrayed by Tchéky Karyo, who also played Fouchet in Bad Boys and Anton Depeux in Addicted To Love.

Initially perceived to be the best of the police force in France for 'masterfully' solving the problem in Tehran incident, Richard is revealed to be a corrupt and violent French police detective whom a Chinese intelligence agent named Liu Jian meets in a hotel in Paris when Richard was busy pummeling a hapless Chinese man to a bloody pulp. Liu is led to believe that he is providing reconnaissance of a meeting involving a Chinese mobster named Mr. Big, but while Mr. Big is in a room with two prostitutes, one of them tries to murder him. As Liu rushes to stop her, Richard appears and shoots both Mr. Big and the prostitute dead with Liu's handgun. Richard reveals his intentions to frame Liu for the murders, but Liu manages to obtain the surveillance footage proving that Richard is the true killer. Richard and his henchmen pursue Liu throughout the hotel, attempting to kill him, but Liu proves to be too elusive for them to keep up as the lone Chinese agent fights his way out of hotel.

Later, Richard tries to convince Chinese liaisons who have arrived in France that Liu is the primary suspect, though they are unconvinced. Here it is revealed that Liu Jian's task was to arrest Mr. Big and find out who Mr. Big's French connection is; it turns out that Mr. Big's connection was - none other than Richard himself. Richard, fearing that his corruption would be exposed, killed Mr. Big and the hooker who stabbed Mr. Big to keep his criminal activity in secret. Liu later meets up with one of the liaison and gives him the tape, but Richard already had his cronies following the two Chinese. Liu's meeting was spotted, and one of Richard's men kills Liu's liaison personnel and recovers the tape. Once again Liu is forced to fight his way out against not only Richard and his thugs, but also G.I.G.N units (deployed at the request of Richard to ensure Liu's demise). Although wounded, Liu once more manages to elude his pursuers. Despite failing to kill Liu, Richard was content that the evidence tape is back in his hands.

Afterwards, Liu meets a prostitute named Jessica Kamen who tells him that Richard had previously kidnapped her daughter, Isabel, in order to force her into the job. They do not have more time to know each other better though, as Liu's hideout was soon discovered by one of Richard's goons. Liu immediately kills the goon, but not before the goon destroys Liu's hideout, forcing Liu and Jessica on the run. Once again an encounter with Liu that ended with his henchman being bagged and his attempt to kill Liu getting evermore complicated, Richard verbally lashes out at the two Chinese liaison personnel who accompanied him to survey the murder scene.

When Liu realizes that she had been the second prostitute present in Mr. Big's room when he was murdered, he strikes the deal with her: if she goes to Richard's office to get the tape back and succeeds, Liu in turn will reclaim Isabel and return the child to Jessica. Richard has her tied up in his office while he's gone, but she manages to break free and escape with the tape and with Richard's pet turtle, which Jessica subsequently frees. Liu tries to convince Jessica that it would be easier and better if they go to Chinese embassy to submit the tape first, but Jessica demands Liu that he keep the end of his bargain. The pair then travel to the orphanage where Isabel is but are ambushed by Richard's men, as he had guessed where they would be heading next. While Liu manages to escape unscathed, Jessica gets shot and Liu is forced to take her to the hospital, vowing to rescue Isabel from Richard and reunite her with her mother.

Liu goes to the police station and phones Richard, telling him to come to the window. As he does so, Liu pinpoints his location and fights his way through swarms of henchmen using his superior martial arts skills. Once again as happened in the hotel, Richard's henchmen are unable to keep up with Liu's phantom-like elusiveness. After dealing with Richard's men Liu finally confronts Richard, who is holding Isabel hostage, and Richard goes to shoot him. Liu dives at him and, despite sustaining a bullet wound, manages to stick an acupuncture needle into the back of Richard's neck. A puzzled Richard asks Liu what he has just done to him, and Liu reveals that the needle has punctured a forbidden location of the body known as the 'kiss of the dragon', which stimulates all the body's blood to travel to the head. Initially disbelieving Liu, Richard realizes too late that the former's words were true just as Liu leaves after bidding him goodbye. Richard then starts shivering uncontrollably as blood begins to seep out of all the orifices in his head, including his eyes, ears, mouth and nostrils. Ultimately, Richard collapses on the floor and dies painfully of a brain aneurysm as Liu makes off with Isabel.

Unknown to Richard, Liu had submitted the tape that contained the evidence of Richard murdering Mr. Big to the Chinese embassy prior to the assault on the police department. As Richard faced off Liu while holding Isabel hostage, his police department was swarming with French tactical police unit (called R.A.I.D) who were on their way to arrest Richard: if Liu didn't kill him, Richard would have been apprehended for his crimes. His fate either way, was sealed.

Richard watching mob boss Mr. Big and his prostitutes on a security screen.

Richard pursuing Liu throughout the hotel after attempting to frame him for Mr. Big's murder. 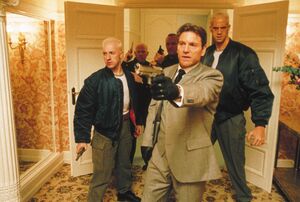 Richard and his thugs in their vain attempt to kill Liu.

Richard telling Chinese liaisons that Liu was responsible for the murder.

Richard engaging with one of his prostitutes, Jessica Kamen.

Richard driving after Liu in his car.

Richard investigating an assault by Liu on several pimps.

Richard about to handcuff Jessica to prevent her escaping from him.

Richard stands incapacitated after Liu places an acupuncture needle into the back of his neck.

Richard gets his comeuppance as he bleeds from his facial orifices and dies painfully from a brain aneurysm.