Fallen Hero
Jean Bison is a character from the video game, Sly 2: Band of Thieves. He is a prospector during the Gold Rush of 1852, Jean Bison, who was looking to strike it rich, took one too many chances and wound up buried and frozen alive during a freak avalanche. However, in the present day, thanks to global warming, he thawed out, leaving him out of touch with present day society. A product of his time, he dreamed of "taming" the Wild North by leveling the forests and placing dams on every river, with progress delivered at the sharp end of an axe. Serving as the shipping baron for the Klaww Gang allowed him to bankroll his one-man war against nature. Using his train system that spans throughout the Canadian plains, Jean Bison's abilities are of utmost importance to the Klaww Gang.

Jean Bison first appeared in Episode 2: "A Starry-Eyed Encounter", along with the first appearances of the Contessa and Arpeggio, at a ball Rajan was hosting. It is safe to assume he was a VIP at the event. He later appeared beside Rajan as they watch Sly dance with Neyla, commenting that he wished Rajan's spice shipments moved as well as Sly.

Despite his backwards, low-tech ways and old-style thinking, Jean Bison ended up with four of the Clockwerk Parts: the Lungs, Stomach, and Talons. When Sly first encountered him in a log cabin to take pictures of the train routes, he overhead him talking to Arpeggio through a speaker, Sly learned that Jean Bison attached the Lungs and Stomach to his three Iron Horse trains, allowing them to run day and night without stopping. Sly also learned that he hid the blueprints of them in his trophy bass, which Sly managed to steal one in the cabin Bison was in. Sly then went over to another cabin where the second blueprint was being guarded by ducks. Sly acquired the blueprint from the trophy bass there and then went after the third blueprint in a cabin guarded by moose's. As Sly managed to acquire all the blueprints, he went to the top of mountain where a satellite dish is to intercept with Iron Horses GPS data.

The only way into the Iron Horse trains was through the caboose which were locked tight. In order to open them, Sly had to collect spices from several balloons in the sky to use as explosives as Murray flew him in an ice plane. After finishing collecting spices, Sly then had to land directly on the train's cabooses in order to open them. After that, however, Murray was captured by Inspector Fox. Sly was to follow Inspector Fox to pickpocket her for her three keys to Murray's cell.

Bentley entered the first Iron Horse train and made his way to the front of the train where one of the lungs is. Bentley stole the part and got off the train.

Murray snatched two bear cubs in order to lure a bear and destroy and cage protecting a hand rail. As he brought the two bears to over the hand rail's cage, the begin to fight which the mother bear noticed and destroyed the cage to stop the cobs from fighting.

Sly made his inside Iron Horse 2. He made his way to the front of the train and stole the other lung there.

Iron Horse 3 was going too fast for the Cooper Gang to follow in town, so they drive in the hand cart from earlier and after the train. As Sly made halfway through the train, Neyla appeared in her biplane, preventing Sly from moving forward. Luckily, Bentley unleashed his RC chopper upon Neyla and defeated her with it. Once Sly made it to the front of the train, he found the Clockwerk stomach to be bolted down by Jean Bison. Neyla reappeared in her biplane, but was defeated again by Bentley's RC chopper. Bentley then crashed his RC chopper into the train's smoke stack, freeing the Clockwerk Stomach.

After losing three of his Clockwerk parts, Jean Bison escaped to his large lumber camp on the coast of Northern Canada and continued his true operation—using his giant attractor to collect the light energy of the Aurora Borealis into his Northern Light Battery for Arpeggio's blimp. While Sly heard him talking to himself, he also began preparations for his Lumberjack Games, a competition for which he put up his Clockwerk Talons - that he'd been using to cut down trees - as a trophy to bring in the competition. This drew Sly and the Cooper Gang like moths to a flame. After setting up the northern lights battery for their transport to Arpeggio's blimp, they entered the games.

However, during the games, Jean Bison persuaded the judges to give him tens, making the Cooper Gang knock them out and dressed up like them. Despite stellar performances and cheating to make Jean Bison lose, the three were captured as Jean saw threw their disguises and threw the talons at them. While the Cooper Gang was in his custody, Bison had his men raid the gang's hideout and steal all of the Clockwerk Parts that the gang had collected and sold them to Arpeggio (including the talons). He then revealed this to Bentley after he escaped and called him stupid for being a turtle. Bentley was then forced into a battle with Bison and, using the lumber camp's equipment, Bentley was able to beat him. As he laid there in defeat, he claimed how times have changed after losing. Just then, a man on the speaker told Bison that Arpeggio is coming to pick up the Northern Light battery.

According to the ending of Sly 2, although he was not arrested, Jean Bison somehow turned over a new leaf and went to work for the EPA, and froze yet again on a mission to save baby penguins.

As a lumberjack who partakes in games, he is very skilled with an axe and at chopping. Wherever he goes, he carries a wooden stick with him as his main weapon. With the Clockwerk talons, his stick becomes a cutting instrument that Bison used to chop down an entire forest. While he fought Bentley, he also liked to throw bombs around.

He was considered to be a hero by Sly as he was once a frozen prospector. Although he was very cruel to nature as he tried to "tame" the Wild North, and Sly was creeped out and found him strange as why he was using the Clockwerk parts, despite his low tech ways. When he was on the speaker with his men, he treated them with respect and said they'll go hunt some bears. Jean also seemed to be Arpeggio's right hand man as Arpeggio trusted him with the lion share of the parts, and how Jean was able to reclaim the parts that were stolen by Cooper for him. After he was defeated by Bentley, he said times changed. This meant that he learned from his actions about destroying nature and made him redeem himself by working for the EPA. 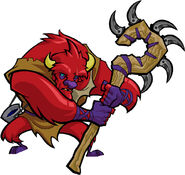 Jean Bison was buried in an avalanche