Kidnapping men and children for the work at the mines, Attempting killing the Expendables, Wreaking havoc and destruction

He was portrayed by Jean-Claude Van Damme in his second villainous role.

Vilain is extremely diabolical, sadistic, selfish ,egotistic, ruthless, murderous, fearsome and tremendously cruel and ruthless individual, who sees nothing more or less to reach his goals and to become rich from selling the would-be nuclear weapons, which means that he is also greedy. Despite his cruel personality, Vilain seems to be really calm and peaceful individual, but he does will kill any man who will stand in his way.

After Vilain draws Barney Ross to him, they engage in a short gun fight until Vilain runs out of ammunition. He then goads Ross into facing him in a fair fight and they battle each other in very vicious, brutal and violent fight with Vilain holding the upper hand throughout most of the fight. However, Ross finally defeats Vilain by beating him down with chains, Ross kicks Vilain and then orders him to get up as he recovers his knife, Vilain obeys ans then Ross ties the chain around Vilain's neck and pulls towards the knife stabbing him in the stomach with the same knife he used to kill Billy. Finally, Ross cuts Vilain's head off and presents it in a bloody bag to Trench and Church to prove the villain is dead. 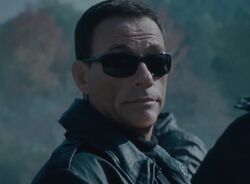 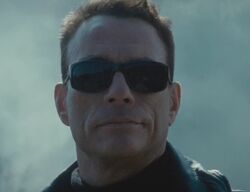 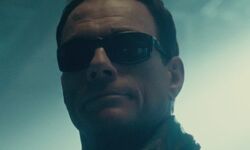 Retrieved from "https://villains.fandom.com/wiki/Jean_Vilain?oldid=2262128"
Community content is available under CC-BY-SA unless otherwise noted.