Help the Bureau of Genetic Welfare to keep the city safely inside the fence and stop them from leaving.

She is the leader of the faction Erudite solely because of her IQ score, and the ringleader behind the Erudite/Dauntless alliance against the Abnegation.

In the film adaptation, she was portrayed by Kate Winslet.

Jeanine Matthews is the Erudite faction representative. She makes many articles based off lies about Abnegation in order to smear bad faith towards the faction. This tactic would lead to people doubting whether Abnegation is actually selfless, but rather a faction hoarding food for themselves. She, along with Eric, began the second war. She created a serum that would allow her to control people into killing off every Abnegation member. Knowing that the serum didn't work on the Divergent, she creates a second serum, which she uses on Four, leaving him in a simulated state (Four manages to get back to his own reality when he and Tris square off).

She was motivated to do this because she knew the truth about the factions and did not want to go back to the rest of the world, but rather stay in the factions with Erudite in control so that they would never leave the city.

Jeanine continues her plans of hunting down the Divergent during the first half of the book, sending out the Dauntless traitors they have recruited to take them to the Erudite compound for testing. She is greatly frustrated during Tris' testing because she is left unsuccessful up to the end, so she has Tris executed the next day. However, in a improbable outcome, ex-antagonist Peter switches the lethal injection with a stunning shot with the water colored purple to make her seem dead. He then rescued Tris and Four from the compound, stating he owed them for saving his live earlier on in the book, not because anything else, but to pay his debt to them.

When the Dauntless and Factionless rebels attacked the Erudite compound, Tori corners Jeanine Matthews in her laboratory, as she is still bent on revenge for her brother's death. Tris tries to stop Tori, needing Jeanine to unlock and locate the file she and Marcus need on her computer. She is unable to though, as Tori eventually stabs Jeanine in the stomach with a knife anyway, which leads to her death.

In the film, Jeanine is met by Evelyn, Four's mother, in her prison cell after the city's populace had been liberated by Tris, Four, and the Dauntless/Factionless forces. Jeanine comments that the people will not know what lies beyond the wall. Evelyn responds that she will never find out before shooting her in the back of the head.

Jeanine is extremely arrogant, cruel and ruthless, much like her fellow Erudite members are. She is also extremely intelligent, logical, independent and a brilliant strategist of the finest caliber. She possesses absolutely no compassion, empathy or remorse, seeing it as only necessary to wipe out an entire faction to achieve her goals. With these traits, she can be described as a complete sociopath.

According to an interview on the show Ellen, Kate Winslet describes her character Jeanine as a 'female Hitler', as she wants to remove all the Divergents. However, most people who live in Erudite describe her as a brilliant teacher, and she is highly respected by them. 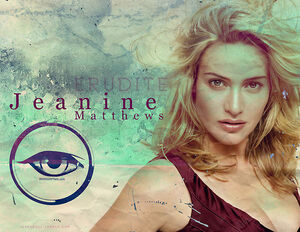 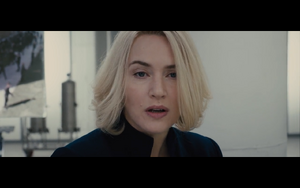 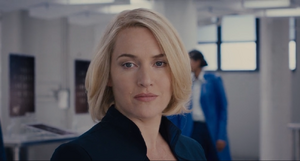