Pyrokinesis
Increasing her own strength
Self-healing
As Santa Lily:
Skilled use of her spear
Summoning objectsIn Swimsuit:
Umbrakinesis

Raising vengeance against the French and gain the Holy Grail (formerly).

Jeanne Alter, also known as Joan of Arc, Jeanne d'Arc and Joan Alter, is a major character in Fate/Grand Order, first appearing as the main antagonist of Orleans chapter and Da Vinci event, before appearing as a playable Avenger-class Servant and a supporting protagonist in several events and chapters. She is also shown to be a rival and frienemy to Saber Alter.

Unlike Saber Alter who is an outright corrupted version of Saber/Artoria Pendragon, Jeanne Alter is an alternate version Jeanne d'Arc of vengeance created by Gilles de Rais using the Holy Grail. As a Heroic Spirit and dark counterpart of the actual Jeanne, she was originally summoned by Gilles in the Ruler class, but can later be summoned by Chaldea in the Avenger class.

Gilles wished upon the Holy Grail for the Jeanne d'Arc he pictured in his mind, one who would share his ideals (and prejudices) and take vengeance upon France for burning her at the stake. However, because the real Jeanne possessed the purity of a true Saint, the possibility of "summoning a different side" of her was zero. Thus Gilles settled for the next best thing and created an imperfect copy of Jeanne: a vengeful holy woman who speaks of justice and cuts down her enemies without hesitation or regret; a blackguard commanding an army of dragons, known and feared as the "Dragon Witch".

Despite her looks and twisted nature, those are not the reason why she is an Avenger, unlike others who had been tormented or had a bad reputation in life (since her original class is Ruler); she only becomes one for her revenge against Chaldea and Altria Alter over Orleans and the Christmas 2015 event, which kicks in with "Da Vinci and the Seven Counterfeit Heroic Spirits" where she returns with a vengeance.

Santa Lily is a Lancer-Class Servant and a younger version of Jeanne Alter who debuted as the free Servant of the Christmas 2016 event. She was changed when Jeanne Alter unknowingly drank Gilgamesh's youth potion, now she's here to spread the joy of Christmas.

Her personality is actually closer to the original Jeanne as she can be too serious and inflexible and acts rashly at times. A key difference between the two is Jeanne Alter Santa Lily's tendency to panic and cry when faced with a situation she can't easily resolve. She feels ashamed at the peevishness of the adult Jeanne Alter.

The swimsuit version of Jeanne Alter debuted as the free Servant in the 2018 Servant Summer Festival event in Japan, as Jeanne Alter wore a swimsuit in Hawaii and transformed herself into a Berserker-Class servant to fight against the suspected Foreigner in Hawaii (which is comical since Bersekers are weak to Foreigners), but she changed her mind and joined ServaFes contest when she discovered Jeanne d'Arc was the top seller among the event's participants.

Having been freed from the curse of the Avenger Class, Jeanne (Alter) has turned her attention to more important matters: winning the annual ServaFes Artist Alley contest and showing a certain popular goody-two-shoes who the coolest, baddest and most awesome summer Servant in Chaldea is. She has all the hottest tourist spots extensively researched and bookmarked in her handy pocket guidebook; not that she's excited about being in Hawaii or anything. 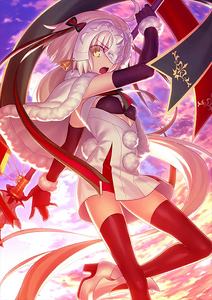 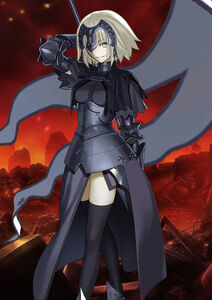 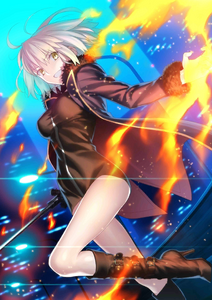 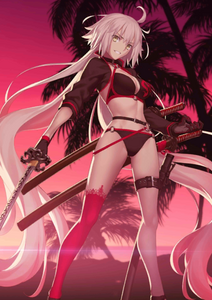 Swimsuit
Add a photo to this gallery

Retrieved from "https://villains.fandom.com/wiki/Jeanne_Alter?oldid=3923970"
Community content is available under CC-BY-SA unless otherwise noted.