Vengeful Specter
Jeannine Richardson is the central antagonist of the 2002 horror film FearDotCom. She's one of the earliest victims of serial killer Alistair Pratt, resurrected as a ghost to haunt people through a website out of revenge for her life not being saved.

She was portrayed by Gesine Cukrowski, with a hallucinatory younger version of her being portrayed by Jana Güttgemanns.

Jeannine was kidnapped by nihilistic serial killer Alistair Pratt while Pratt was still at large. Per Pratt's usual M.O., she was brutally bound while naked and mercilessly tortured past her breaking point. After two days exactly, she begged Pratt to kill her so she didn't suffer anymore, which Pratt obliged by murdering her.

Jeannine resurrected as a mtuialted spirit and created a site titled FearDotCom to get revenge on the world for not saving her, as Pratt's signature was broadcasting the torture she and other girls and women went through live on the Internet. Jeannie entised viewers to log on and see grotesque imagery of the same horrors she experienced, appearing in a scanty corset while beautiful and unscathed. In 48 hours exactly, as the viewers would continuously hallucinate throughout those two days exactly, including seeing visions of her as a little girl, they would eventually be driven to their deaths by visions of their worst fears, bleeding from their orifices before they died in what appeared to be tragic volent accidens or suicides, their expressions frozen in horror.

The latest victim, Polidori, died from being hit by a subway train. Detective Mike Reilly, partnered with Department of Health researcher Terry Huston, investigate and find the other victims in the spree. After ruling out biohazards, their hard drives were all found to have been destroyed in their software. Mike's friend, forensic specialist Denise Stone, reviews the hard drives and finds FearDotCom herself. She reports her findings, only to fall out her apartment window two days later.

Despite Mike's regret over Denise's death and Terry's realization of the M.O., they both still evaluate the site for information. They both realize Pratt, still at large, fits the details of torture and killings demonstrated in the site. From more information in the investigation, they realize a spectral Jeannine is the killer, motivated by vengeance and her desire to seek out Pratt.

When Pratt's found, holding another girl hostage and as a human shield, Pratt shoots Mike and takes Terry hostage in an attempt to torture her as well. But Mike logs on to FearDotCOm and Makes Pratt watch the site, leading to him being sucked into another universe inside the site. Jeannine appears with the other women and girls Pratt tortured to death, getting their revenge by fatally tearing Pratt limb from limb. Terry and the girl are both freed, with Mike dying from his wounds.

Later that night, Terry gets a phone call from her apartment with nothing but computer static on the other line, causing her to hang up the phone and hug her cat. It's unknown if Jeannine was responsible for the call or if the call even meant something, leaving the question open of whether Jeannine is at rest or not or even if another party, spectral or not, harassed Terry. 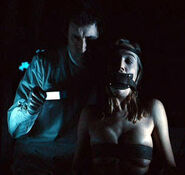 Jeannine Richardson being terrorized and harassed by Alistair Pratt.

Jeannine as a little gil in hallucinations.

A young Jeannine with a ball. 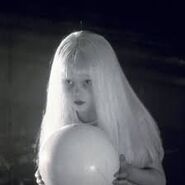