Member of the Saviors (formerly)

Leader of the Savior Marauders

Kill the Militia and take the Sanctuary back (failed).

Jed is a recurring antagonist in the AMC television series The Walking Dead. He was a member of the The Saviors and led a rebellious group of Saviors after Negan's defeat. Six years later, he leads a group of marauders who were former Saviors. He serves as the main antagonist of the first half of Season 9.

He was portrayed by Rhys Coiro.

While working at the bridge, Henry offers water to the workers. Justin pushes him down for not giving him more water and begins drinking from the container. Henry gets furious and hits him down with his stick. Jed sees this and jokes about it before helping Justin get up.

Later, a group of walkers approach the work site, and a disturbance results. Jed panics and lets one of the logs go, making it fall onto Aaron's arm. Daryl orders Jed and the rest to lift the log while he kills walkers around him. That night, he associates with Regina and Laura around an open air fire.

Out and about, Jed and a little gathering of Saviors meets Maggie and Kal while bringing food to the Sanctuary. Jed questions her about their missing individuals. He takes a tomato out of the back and takes a large chomp, mocking her. Maggie says she'll stamp him down for it while other Saviors let her pass.

At the camp, the Saviors are furious with the news of Justin's demise. Alden then says he'll promise they'll get to the bottom of this. However, Jed punches Alden, who claims he isn't one of them any longer. Carol ventures in with her weapon, ceasing Jed. After Jed watches the Saviors accuse Daryl and Anne for being culprits of Justin's murder, he disarms and calm down by Laura.

Around night time, Jed stages a trap in the forest areas for Carol and Rick by pretending to be a walker. At the point when Carol holsters her firearm and plans to slaughter the apparently undead Jed, D.J. catches her and pushes her into Jed. He holds Carol at blade point while Rick focuses the weapon at his head. Jed discloses to Rick and tied in with recovering their weapons for security before taking off. Carol quickly takes her knife out and stabs him in the shoulder while Rick overpower D.J. to his knees.

Jed asks Carol for what reason she didn't murder him to which she answers that each life counts. The following morning, Jed, alongside other Saviors, leave the campsite.

At the camp, as Carol packs up, a furnished Jed and a few Saviors return. At the point when asked where he got the firearm, Alden wasn't quick enough to shield himself. He realizes that Oceanside were the ones murdering the Saviors and he needs her to move to one side so he can order his requital. Carol claims to surrender yet assaults him once more, but more Saviors show up and a shoot-out begins.

After six years, Jed, Regina and other previous Saviors traps Carol and Henry while on their way to the Hilltop with supplies. Jed walks up with a gun and grins smiley. Jed tells Carol and Henry that since the Sanctuary was abandoned they've needed to get more desperate, to the point that they ate their horses and use the walkers to drag their wagons. Carol brings up that he and the marauders could have gone along with one of other communities, however Jed says that isn't their direction. He discloses to her he will give them a chance to let them off since she saved him some time ago and will let them to keep their wagon and horses, yet he's taking all their stuff, including her ring. This made Henry furious, who kicks up his stick and hits Jed down. Jed tosses Henry to the ground at the same time, before he can hurt him, Carol hops in and gives him her ring. Jed says thanks to her and leaves with his people.

During the night, Carol comes back to the Saviors' camp. She douses the sleeping Saviors with gas and takes the matchstick from Jed's mouth. As Jed awakens, Carol advises him that she could pardon Jed taking her ring, however other supplies at their camp had a place with individuals who never returned and includes that Jed harmed her child. Jed claims that they found the abandoned supplies and never harmed anybody, and begs Carol, promising that she will never see them again. Unaffected, Carol continues to light the match, setting Jed and other Saviors ablaze and burning them alive. 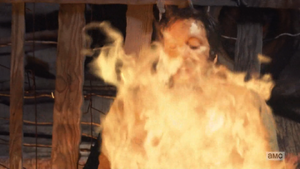 Jed's demise.
Add a photo to this gallery
Retrieved from "https://villains.fandom.com/wiki/Jed_(The_Walking_Dead)?oldid=3796111"
Community content is available under CC-BY-SA unless otherwise noted.