High priest of the Duma Faithful

Sacrifice Alm and Celica to Duma (failed with Alm; temporarily succeeded with Celica but ultimately foiled)

Jedah (ジュダ, Juda) is the secondary antagonist of Fire Emblem Gaiden and its remake Fire Emblem Echoes: Shadows of Valentia. Jedah is the High Priest of the the Duma Faithful.

He is voiced by Takubo Shuhei in Japanese and Richard Epcar in English.

After much sacrifices and offerings to Duma, Jedah gained great power but was marked with blue skin, white hair, and black sclera with white pupils. He wears a black and purple ceremonial robe with ornate gold designs, as well as a gold collar with a purple jewel.

Wholeheartedly devoted to Duma's teachings, Jedah sees little value in compassion. Like his master, Jedah believes that pain and suffering generate strength, and encourages the Faithful to endure suffering. Jedah is also willing to sacrifice anyone, including his own daughters, to the War Father to see the Fell God's visions realized. But despite his cruelty, Jedah truly believes his actions ultimately benefit Valentia, because to him Duma's doctrine is the single greatest path to humanity's growth.

Originally a simple priest of the Faithful, Jedah fathered Marla, Hestia, and Sonya, but abandoned all three to a priory. When Duma started to go insane from dragon degeneration, Jedah disputed with High Priest Halcyon over his sudden desire to conquer Valentia. With Duma's blessing, Jedah banished Halcyon and became the new High Priest. He also became an advisor to Emperor Rudolf of Rigel, and reunited with his daughters to sacrifice their souls to Duma. Sonya was able to flee, but Marla and Hestia were turned into Witches.

At Jedah's advice, Rudolf entered the neighboring country of Zofia and stormed the Tower of Mila, dragon-slaying Falchion in hand. After slaying Mila and sealing her soul into the sword, Rudolf delivered her bones to Jedah, the Falchion still embedded inside her skull. Jedah placed both inside the deepest catacombs of Duma Tower. With the Earth Mother gone, Zofia slowly began to decline.

Determined to find Mila, Celica left her priory in Novis and journeyed across Valentia, gathering an army along the way. Concerned over Duma's deterioration, Jedah vows to deliver her to him. As Celica's army passes through the Dead Man's Mire on the way to Duma Tower, Jedah telepathically contacts her. Jedah explains that both Mila's and Duma's degeneration threatens Valentia, and offers to return Mila's skull to Zofia if Celica offers her soul to Duma. Jedah claims that the soul of a powerful Brand-bearer can cure Duma of his madness, and with Mila returned, the two nations of Valentia will be saved and her friend Alm, who is waging his own battles as leader of the Deliverance, need fight anymore. Celica notes that she has no reason to believe him, but Jedah says he will await her response atop Duma Tower.

Jedah meets Celica's army in person at the Swamps of Duma, where she states that she will not make a decision until she meets with Mila. As Celica is life is the only one he needs, Jedah tries to destroy the rest of her party, but if defeated or simply resistant to his magic, he changes his mind and retreats to Duma Tower. If Celica spared Sonya in the battle with Grieth's pirates, she vows revenge on him for what he did to her sisters.

Once Celica reaches Jedah on Duma Tower, he reveals that upon her soul's imprisonment in Falchion, she sealed its powers away in turn. With the only weapon capable of slaying Duma disabled, Jedah again requests that Celica offer herself to Duma, and teleports the rest of her army to below Duma Tower so they wouldn't sway her against the idea. He shows Celica a vision of Alm defeating Ruldolf, and states that with a sealed Falchion, confronting Duma is tantamount to suicide. Fearful for Alm's life, Celica finally agrees with Jedah's deal in exchange for his safety. Pleased, Jedah takes her to Duma Tower's underground catacombs to prepare for the ritual.

When the Deliverance reaches Duma Tower, Jedah thanks Alm for killing Rudolf and allows him to meet with Celica one last time. Shortly after, Jedah states that he lacks the ability to free Mila's soul and unseal Falchion, and reminds Celica that the latter sealing was performed by Mila herself. Celica is furious that Jedah lied to her, but he flatly tells her to blame Mila for abandoning Zofia and destroys the Divine Dragon's skeleton save for her skull. Despite Celica's efforts, Duma's single functioning eyeball appears and devours her soul, leaving her a devoted Witch. Jedah sends her to the depths of the Royal Vault, along with Mila's skull and Falchion. He himself goes down to watch when Alm enters the Vault, expecting to be entertained with their fight to the death, but is shocked and retreats when Mila's spirit instructs Alm on how to unseal Falchion. Alm stabs Celica with the sword, but Mila uses the last of her strength to revive her and restore her soul. Together, the two armies fight and defeat Duma, Jedah, and his two Witch daughters. 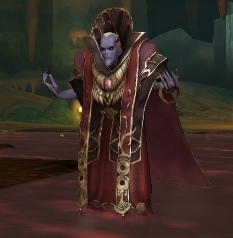 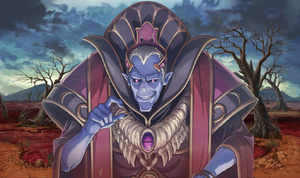 Jedah in the Swamps of Duma.
Add a photo to this gallery

Retrieved from "https://villains.fandom.com/wiki/Jedah_(Fire_Emblem)?oldid=4128624"
Community content is available under CC-BY-SA unless otherwise noted.