One of the 3 High nobles of Makai

Jedah Dohma (in Japanese: ジェダ・ドーマ, Jeda Dōma) is the main antagonist of the Capcom fighting game Darkstalkers 3 (known alternatively as Vampire Savior: The Lord of Vampire).

He was voiced by Isshin Chiba in the Japanese version, and by Travis Willingham in the English dubbed version of Cross Edge, while in Marvel vs. Capcom: Infinite, he was voiced by David Kaye.

Jedah is very cool, collected and confident. He has a high degree of arrogance, but as a whole, he is focused and patient, all for achieving his goal of saving Makai from a destiny seen by Belial. It is rare to see Jedah express emotion, except in fits of the inhumane side. But even these are subdued by his own calm attitude eventually. On the other hand, Jedah is less of a hotheaded individual, as he is shown to be laid-back and easygoing with others who encounter or comfort with him.

Jedah was the master of the Dohma family, one of the three families that ruled Makai (Japanese for "demon world"). Dohma is always distressed about the future of Makai. He believes that if Makai is left under Belial's rule, the master of the Aensland family and the true ruler of Makai, then it will grow old and begin to fall. Belial would most likely say that such is destiny and life. Jedah considered Belial to be an abomination, actively seeking out the opportunity to kill him and waiting for the right time to strike.

After the death of Garunan, the master of the Bosital family and the oldest of the three high nobles, Jedah has a young confidant named Ozomu, a gourmet of souls who came to Jedah was to eat "delicious souls". As a noble his skills were second class, but his ability to deceive others is first class and he is a genius in using others. He advises Jedah about using the gate of Makai and Jedah, being confident in his ability to absorb souls, agrees to do it. He orders Ozomu to break a part of the seal to open the gate.

When Ozomu arrived at the gates, he realizes that enormous powers lay within the gates and that even Jedah would destroy himself if he absorbed all this power at once — he sees this as his chance to take over the throne. He lies to Jedah and tells him that he must destroy all the seals, because little power is coming out. After destroying the seals he runs off to the far reaches of Makai. The destruction of Jedah means his rise to power and his plot succeeded.

Ozomu gathers the left over power and stores it in Dohma Castle. This is how Ozomu becomes the new master of the Dohma family and "Emperor Ozomu".

100 years later, after a century-long sleep, Jedah is resurrected in Makai. He feels for the crazed Makai, nobles fighting each other and spilling blood. Instead of anger he feels pity towards Ozomu, who had betrayed him. Jedah begins his complete revival and the cleansing of all souls. For this a new stage was necessary, manifested in a new dimension, the Majigen.

Jedah arrives at Dohma Castle and seeing Ozomu he lays out his hand. Although his powers were not completely restored yet, he had enough power to remove Ozomu who had become a spineless gourmet. Jedah quietly whispers, "Ozomu... I am sorry, but please lend me your powers. Your soul would become the foundation of Majigen and will help the future of Makai."

The Dohma Castle is taken into the dark space along with Ozomu, the beginning of Ozomu's salvation. Jedah believes that he was the one that needed to recreate life by fusing all souls into one life form, the Shintai. To do this, he summons all those with worthy souls to enter into his newly created realm.

Being an S-Class Darkstalker, Jedah is one of the strongest beings in the Darkstalkers universe. His very blood is dangerous and can even hurt enemies and he especially likes to splash it in large waves. Splashes of his blood can reform into jagged blades, and his trademark attack, consist of a floating, rotating bloody blade. In addition, he can pump his enemies full of blood until they explode from the inside out and summon large demonic hands. He can even decapitate himself or mutilate any of his body parts without suffering any ill-effects and can regenerate his body parts from these wounds. He is fond of contorting his wings into weapons, such as forming them into spinning blades and scythes or use them as shields. He doesn't really use punches or kicks, instead relying on his wings and claws. He can extend his arms and his claws towards his foes to pierce them. He is able to absorb the souls of others from which he can instantly increase his own powers. He is capable of passing through dimensions and he can sense the energies of other beings on a cosmic scale.

Jedah makes an appearance in Project X Zone. He is one of the boss characters.

Jedah makes his debut appearance as the secondary antagonist of Marvel vs. Capcom: Infinite. He is one of the playable newcomers of the game.

Before the events of the game, Jedah appeared before Lady Death and convinced her to merge the Marvel and Capcom universes together, to bring forth the equilibrium between life and death.

Jedah later teamed up with M.O.D.O.K. after the convergence and gave him the space stone to help him open a portal leading from A.I.M.BRELLA to the Dark Kingdom. In the Dark Kingdom, Jedah is feeding a symbiote with souls from the soul stone until he was encountered by Ghost Rider, Doctor Strange, Sir Arthur, Dante, and Morrigan. Strange tried to stop the developing symbiote with his magic, only for it to fall into the portal beneath it with Jedah laughing at them for their failed attempt.

Jedah arrived at A.I.M.Brella headquarters, where he encounters Spiderman, Mayor Haggar, Frank West, and Chris Redfield. He sensed more infinity stones nearby and disappears, leaving the heroes with the symbiote monster.

Jedah later came across Spider-Man after he claimed the space stone, demanding him to hand it over to let him live. However, as more heroes arrive, Jedah decided to leave the soul stone and let the heroes deal with the symbiote monster.

At Avengers Tower, Jedah appears before Captain America, Ryu, Hawkeye, and Chun-Li after they claimed the Time Stone. As Jedah was defeated by Thanos, Jedah cursed at him and declared the symbiote to consume all of them.

Later, at the Dark Kingdom, Jedah was approached by Dante, who came to him for the Soul Stone. Jedah seemingly defeats Dante with ease at first, but then he was defeated by him in his demon form. As Jedah was in defeat, he tells Dante that only the noblest of souls can handle the Soul Stone. Dante, on the other hand, tells Jedah that he let him live, which he notes was noble. Before he left, he muttered that the four of the Infinity Stones will not be enough to stop Ultron Sigma, so he decided to take matters into his own hands before he left Jedah.

At the post-credits of the game, Jedah was seen with Lady Death, telling her that there is another plan. He then stood by as Thanos appeared with the Satsui no Haido and used it to create a Shinku Hadoken, preparing to unleash it upon Lady Death. 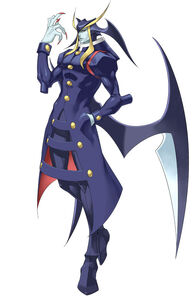 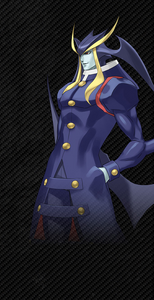 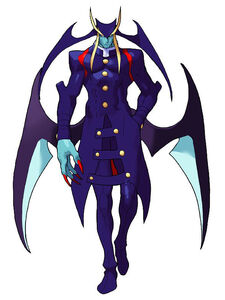 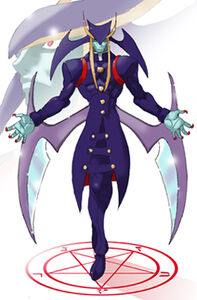 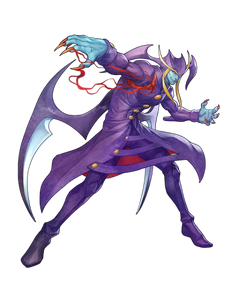 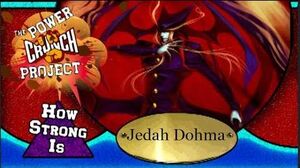 How Strong Is Jedah Dohma (Feat. Nostalgic Gamer)
Add a photo to this gallery

Retrieved from "https://villains.fandom.com/wiki/Jedah_Dohma?oldid=3774508"
Community content is available under CC-BY-SA unless otherwise noted.