Attacking anything or anyone which or whom he can hear.

Kill and devour anyone who crosses his path which makes a noise to survive, including Alyx Vance (failed).

Jeff is a character and mini-boss in the Half-Life series, appearing as a supporting antagonist in the 2020 VR Game Half-Life: Alyx, and the titular main antagonist of the game's seventh chapter.

Jeff is a blind, hostile Xen monster which resides in the abandoned vodka distillery in the Quarantine Zone, that lies a Combine tunnel connecting to the Vault. He poses a great threat and obstacle to Alyx Vance, the story's protagonist.

Jeff was a former human Combine hazmat worker, who was infected by an unknown species of parasitic Xen spores at a vodka distillery in the Quarantine Zone. As a result, he was effectively rendered blind when fungal infection mutated on his face, splitting his head open to resemble a Venus flytrap, which can vomit out corrosive acid. Jeff also has spores sprouting from his back, emitting a toxic gas. The fungal infection mutated several growths on his body, including the swelling of his arm and back.

Because of his unique mutation, he is not a traditional Zombie in the sense that they are infected by common Headcrabs. This is also why Jeff possesses enhanced strength that surpasses that of a normal zombie.

Jeff is far more hostile than his other Xen counterparts, as he would devour, tear apart or attack anything that he hears; his hearing has been significantly enhanced to make up for his inability to see. Jeff also has nigh invincibility, as he is immune to the player's weapon arsenal and can only be killed through unconventional means; Larry, a human Resistance survivor who previously eluded Jeff, affirms this by explaining he is bulletproof.

Due to his previous occupation as a worker for the Combine, Jeff has authorization to pass through Combine force fields.

Alyx Vance first encounters Jeff while attempting to pass the distillery on her way to the Vault, attempting to seize a mysterious Combine superweapon. She manages to distract Jeff by throwing and shattering vodka bottles across the distillery to direct him away from her. Despite sometimes tricking him into a confined location such as an elevator and a freezer, Alyx is forced to bring Jeff with her due to power outages in the distillery that she'd need to fix with her Multi-Tool, incoveniently located in the locations where she traps Jeff. He becomes a nuisance, as Alyx constantly attempts to avoid him while searching for batteries to power the entrance of a tunnel connecting to the Vault.

Should Alyx come too close to Jeff by making too much noise, coughing from the toxic gas he emits, or touching him, Jeff would immediately attack and kill her, forcing the player to restart.

After having successfully powered the tunnel, Alyx would've confined Jeff inside a trash compactor. It is up to the player to either leave Jeff inside and trap him inside for a slow death, or activate the compactor with him inside, which flattens and crushes him.

Jeff, with the fungal flytrap on his face opened. 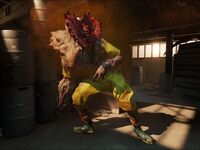 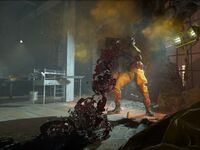 Jeff vomiting out corrosive acid.
Add a photo to this gallery

Retrieved from "https://villains.fandom.com/wiki/Jeff_(Half-Life)?oldid=4160218"
Community content is available under CC-BY-SA unless otherwise noted.