Place an Amazon fulfillment Center in South Park to improve his own business.

Force the strikers back into work.
Turn all the people of South Park into Amazon workers (all failed).
Kill anyone who threatens his business including Josh and Kenny (succeeded with those two; otherwise failed).

Based off of the real life Jeff Bezos, he is the founder and CEO of Amazon who places an Amazon Fulfillment Center in South Park after making a deal with Mayor McDaniels to do so. When a strike occurs and orders cannot be fulfilled, negatively affecting his business, he then arrives in South Park and attempts to regain control, such as depriving strikers of their Amazon premium memberships.

He is voiced by Trey Parker.

Some time later a worker named Josh Carter is attacked by a machine and ends up getting packed. Amazon has said Josh's accident was because of a human error. The workers then decide to strike, much to the dismay of Stephen, who is worried about supplying Butters with a bike for the Bike Parade.

The next day, the citizens of South Park realize that they have no packages. At the scene of the strike, Josh is interviewed, who is now stuck in a box, which cannot be opened or he will die. With the strike, no-one is getting deliveries, upsetting the town. Jeff Bezos visits Mayor McDaniels to speak about the strike. He explains that the customer is most important and, if orders keep getting unfulfilled, she will pay the price.

Stephen comes home after another long day and informs the family that, due to the strike, their Prime membership has been revoked, and they are now Amazon USDA choice. He then goes to pray that the strike will end so he can get back to work and help his family. This is seen through his Alexa by Jeff Bezos and the mayor. Jeff decides to prepare a bus for anyone wishing to return to work.

At the fulfillment center, the strike continues, and Amazon customers are protesting the strike because they want their things. The bus comes along and the strikers yell at the people on the bus. Stuart discovers Stephen is the only one on the bus and the strikers try to persuade him to strike, but Stephen refuses due to the bike parade. Inside, Stephen is the only one working, much to the dismay of Jeff. Stan calls him up and informs him that there are workers that can work at Amazon. Jeff then plans to send a bus out. He discovers during the call about the bike parade, and berates the mayor for not mentioning it, saying everything is important when it comes to the customer. The strikers learn of these workers and Josh leads them, telling them no-one will get into the fulfillment center, at all costs.

The next day, the citizens of South Park are pleased to realize that they are finally receiving the items they purchased on that company's website for the town's upcoming bike parade, where they hope to win first prize. Bezos observes this through Amazon Echo smart speakers. He has Josh kidnapped, and tells a group of small children that Josh's box holds their Christmas gifts, prompting them to rip it open. This causes his compressed organs to explode outward, killing him.

Kenny's father, Stuart, is angered that his son is not boycotting Amazon in solidarity with the strikers. As a result of this, Kenny becomes disillusioned with the commercialism in which he has participated, and tells his friends he will not join them in the bike parade, prompting their fear that they cannot win it without him. When the center's floor manager, Stephen Stotch, learns that Josh has been kidnapped, he continues to feel torn between supporting the workers and his family, especially his son, Butters, who is overjoyed to receive a new bike for the parade.

Stan, Kyle and Cartman go to City Hall to demand the bike parade's cancellation, but find Bezos sitting at McDaniels' desk. Bezos says that the parade was useful to him, as it increased local purchases at Amazon.com, and led all the townsfolk who wanted "fulfillment" to go to work at the fulfillment center. He orders his Amazon Echo unit to kill Kenny, because he sees Kenny's "socialist" activism as a threat. However, the entire town's citizenry shows up at City Hall, where Randy tells Bezos that they now all have "Tegridy", and have all quit the fulfillment center. The bike parade goes on as planned, with Cartman pulling Kenny's coffin on his bike, as the town returns to normal. 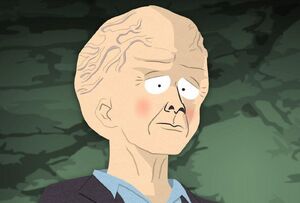 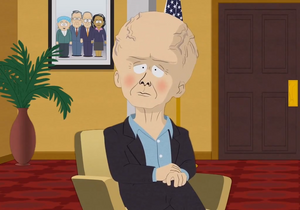 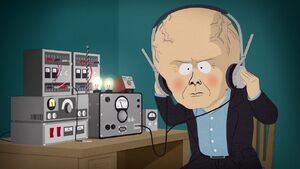 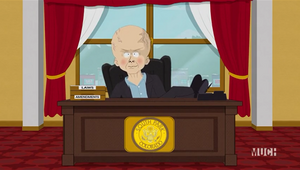