He is voiced by Harry Chase.

Jeff is married to a woman named Shirley, has one son with her and is extremely paranoid that she is cheating on him. Jeff reveals in the final mission that his mom left his dad, which probably traumatized him into his current state.

Despite having obvious mental problems and shabby clothes, he is an extremely wealthy businessman with a black credit card. Shirley became distressed by his paranoid behavior, such as sending her underwear to a laboratory and demanding she get a tracking device in her head.

She then turned to another one of Jeff's wealthy friends for emotional support, and although he was secretly interested in having an affair with her, Shirley was only going to him for a platonic friendship and was very naïve to his obvious attraction cues.

Jeff pays Niko Bellic to take reconnaissance photos of his wife and friend, driving in Shirley's Feltzer to the Superstar Café. Niko successfully sends him a cell phone picture, but seeing that this is not cheating, but just two people talking, Niko tries to calmly tell Jeff to leave them alone, and trust her more.

10 days later, Jeff calls Niko to request his services and meet him in an underground parking lot. Despite Niko's advice, Jeff violently stabbed his wife 50 times with a kitchen knife and hid her body in a Blista Compact. At first, Niko thinks he was joking, but then sees Jeff take out a hand gun, and demands him to calm down. Jeff pays Niko to dump the car in the river, to destroy the evidence. Niko dumps the body and tells Jeff the only thing to worry about is Jeff's conscience.

Later in the game, Niko encounters Jeff again near Drusilla's in Little Italy. He remarried in a remarkably short amount of time, and believed his new wife was cheating on him as well. He stalked her to the restaurant, where she was having a drink with her ex. Jeff then requested that Niko kill her, disgusted by such a request, Niko refuses, and again tells Jeff to calm down, even threatening to physically harm him if he doesn't.

Jeff refuses to listen and instead decided to kill his new wife himself and runs out into the street, where he was accidentally hit and killed by a Turismo. The driver calls 911, but quickly regrets his decision, and drives away from the accident as soon as the police put his call on hold.

Jeff's only child, his son, is left alone with his parents having both died in brutal ways within weeks of each other. 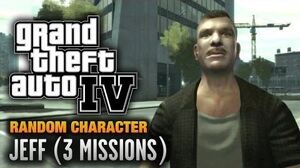