Scare Victoria Hardwick away so Lex Luthor will choose his sister.

Jeff Palmer, aka The Invisible Man, is the very protective brother of Amy Palmer.

He served as the main antagonist in the First season of Smallville episode "Shimmer".

He was portrayed by Kett Turton, who also portrayed the Sand Demon in The Flash.

Jeff's parents worked on the staff at the Luthor Mansion. One day, he found some strange green (meteor rock-mutated) roses on the grounds of the mansion. He studied them, discovering they could turn invisible, extracted the oils, and created a cream that rendered him invisible.

Jeff's sister Amy was obsessed with Lex Luthor, and jealous of his current house guest, Victoria Hardwick. During gym class, Troy Turner snatches Amy notebook from her to see if she is writing about him, but its all about Lex Luthor. Amy's brother Jeff arrives just then to rescue her.

After an encounter with Victoria left Amy in tears, her mother counsels her that even though they live on the Luthor Estate, they are not a part of his world. Jeff assures their mother that they know their place.

Jeff used his invisibility to vandalize Victoria's room. The bedding had been torn up, the pictures are all askew and the walls are covered in graffiti, making Lex think there was a "ghost" haunting his mansion.

When she still didn't leave, he tried to drown her in her bathtub. Clark used his X-ray vision to see a skeleton leaving the room and the assailant stepped on a piece of the broken mirror and left behind some blood and some green goo.

After Amy had another jealous attack, and discovered the stolen watch while finding her shrine of him, Lex asked the Palmers to leave the mansion the following night. When the Palmers left, Jeff went after Lex, attacking him and shouting at him to choose Amy over Victoria. Jeff knocked Lex's head against the wall, rendering him unconscious.

Clark came to Lex's side and Jeff had some knowledge of his abilities and smacked Clark in the face with a mace, which shattered upon impact. Jeff explained to Clark that he found a strange green rose on grounds.

He studied it and used its oils to create the invisibility cream. When he grabs Clark around the neck, Clark elbows him and he flies across the room and into the scaffold. Open cans of paint fall on him, revealing where he is.

After his battle with Clark Kent, he was taken away in an ambulance to Belle Reve in need of some "serious therapy." 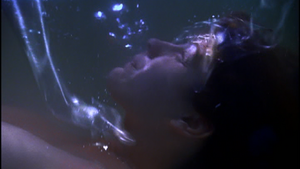 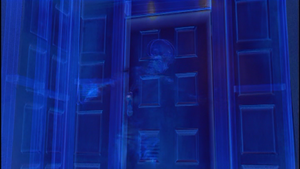