Abusing Brenda and making fun of her.

Kill Glenn Quagmire and anyone who tries to stop him (both failed).

In the latter episode, Jeff was the abusive boyfriend of Brenda Quagmire to the point where he and her brother Quagmire resented each other as a result of Jeff's heinous actions towards Brenda.

He was voiced by Ralph Garman.

Jeff was Brenda's physically and verbally abusive boyfriend who assaulted her regularly. He also absolutely loathed Quagmire for trying to reconcile with his sister and calm her, even though he's her brother. He also kept the neighbors of Spooner Street awake with his quarrels with Brenda who stays with him for unknown reasons, most likely out of fear.

While eating out with Brenda, Lois discovers that Jeff gave her a black eye and Brenda just makes excuses trying to justify his treatment of her. He then reveals that he got Brenda pregnant and will now marry her, to keep her in line. While drinking beer and playing cards, Quagmire proposes a plan to kill Jeff, because he knew that he wasn't going to change.

Joe Swanson, as a cop, refused to do so telling the former that he can arrest him just for saying that, but after Quagmire tells him that Jeff wasn't going to change his ways and they witnesses him beat Brenda over changing a channel on Quagmire's TV and calling her a bitch, Joe agrees to help kill him. At one point, while watching TV, Jeff slapped Brenda across the couch just because he didn't understand a joke. The guys formed a plan by taking Jeff "hunting". In the woods, Jeff figured out their plan by himself, and holds Quagmire hostage. Joe tells Jeff to put the gun down and says that they will forget the entire thing. Interestingly enough, Jeff puts it down.

Quagmire, not wanting to see his sister getting abused again and refusing to forgive Jeff for everything he put her through, refuses to forget the entire thing. Jeff angrily knocks both Peter and Joe unconscious by hitting them with the butt of his shotgun. Jeff brings Quagmire deeper into the woods so Jeff can shoot him but Quagmire suggests that they fight instead. Jeff agrees because he knows that he will easily beat Glenn and so he violently attacks him and strangles him. Just as it looks like Jeff has killed Quagmire, he takes a shovel to bury Quagmire so that no one will find out what he did.

Suddenly, he is illuminated by the headlights of Peter's car, with Quagmire at the wheel. When Jeff is shocked because Glenn is still alive, Glenn shouts that he chokes himself everyday (thanks to him being long-since adapted to strangling himself for erotic purposes). Horrified, Jeff attempts to escape, but fails and he is smashed against tree by Quagmire driving Peter's car, killing him. Quagmire, Peter, and Joe later forge a goodbye letter from Jeff to Brenda which explains that he is leaving her. Whatever impact this had on Brenda's mental state is unknown; but at the very least, Jeff was no longer able to harm her.

His undershirt is also called a wifebeater which symbolizes his abuse towards Brenda.

While nothing much about Jeff's life is explained, the show portrays him as a rude, violent, cruel, vituperative, and above all, abusive man who continually abuses Brenda; both verbally and often physically. He has no fear or shame of showing this behavior in public and hardly shows any love or care towards Brenda at all, or anyone for that matter.

Jeff shows a more sadistic side to his personality when he later mocks Quagmire about Brenda's child growing up without an uncle. He is also willing to kill Quagmire with his own bare hands, when Quagmire tells him that they should fight instead.

Despite not having no redeemable qualities period, Jeff has hypocritical standards as he agrees with Glenn and Brenda that people should not insult family members, regardless the fact he has done much worse. When Joe tells him to put the gun down and promises that they will forget the entire thing, Jeff complies for pragmatic reasons. Jeff apparently sees the trio as his equals, as shown when he gets them and abusively tells Brenda to give them some beers when they visit them to bring him to the woods to kill him. 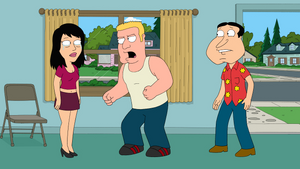 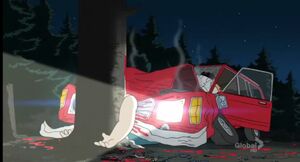