Killing kids at his school

Lure children to the forest, kill them, and take something from them as a trophy.

Jeffrey Charles is the main antagonist of the Criminal Minds episode "The Bogeyman". He is an underage serial killer who preys on other children in his small town.

He is portrayed by Cameron Monaghan, who also played Jerome and Jeremiah Valeska in the TV series Gotham.

Jeffrey Charles was born in Ozona, Texas. He was very close with his father James, until his mother left his father. Along with his mother's abandonment and his father spending more time at school with other children, Jeffrey began to resent other children. One day, Jeffrey took his aggression out on a boy named Robbie Davis and beat him to death with a bat. Having liked the initial murder, he took Robbie's backpack as a trophy and went on to kill two more kids. In order to cover his tracks, he covered the body of an old hermit named Joseph Finnegan with leaves and began living in his house, as it had been rumored that it was haunted.

After the third murder, the FBI's Behavioral Analysis Unit are assigned the case and initially believe the killer to be an adult. Upon hearing stories of the Finnegan house, the BAU investigate and discover food trays, which they're able to pull two sets of prints from. They also discover Finnegan's body hidden under the leaves and rule him out as suspect. One of the sets of fingerprints matches James Charles and the BAU show up to his house to apprehend him. They get to the house right as he's in the middle of disposing of a pack containing Nicholas's red cap. BAU Agent Derek Morgan tackles Charles and interrogates him. Wanting to protect his son, James stays silent, until further investigation into the Charles house reveals Jeffrey's allergy to dairy, which allows Special Supervisory Agent Jason Gideon to make the connection to the trays in the house. Meanwhile, Jeffrey takes a little girl named Tracy Belle out into the forest, saying he knows a shortcut. He makes several attempts to hit her with the bat, but the BAU agents arrive and Gideon apprehends Jeffrey. When questioned why he murdered his classmates, he claims it is because "he wanted to." Afterwards, he is taken away in a police car and likely institutionalized. Before leaving, he and his father have a moment, and James begins to sulk over his son's departure. 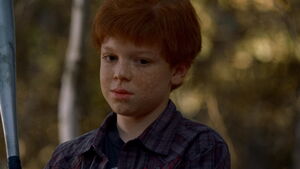 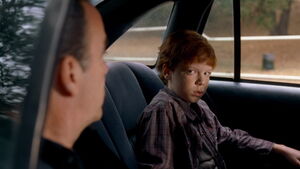 "Because I wanted to."