Self-proclaimed "Emissary of the Gods"

Rid the world of those he perceives as sinners

Jei (or Jei-san), also known as the "Blade of the Gods", is a recurring antagonist in the Usagi Yojimbo comic series. He a virtually immortal samurai warrior who believes that he is an emissary of the Gods sent to purge the world of evil souls, however, he sees everyone around him as a sinner and therefor kills anyone who gets his attention. He is the arch-nemesis of Miyamoto Usagi.

In the 2012 Teenage Mutant Ninja Turtles series, he was voiced by Keone Young, who also portrayed as Silas Sinister from Return to Halloween, voiced as Katarou and Uehara Daizo from Teen Titans.

In the comic series Jei is a major recurring villain first appearing in the 10 issue he was ment to be a one-shot villain but he later reappears with a little girl named Keiko.

In the beginning of the episode, Jei is shown fighting with Miyamoto Usagi, who is enraged at him for murdering an innocent family. However, Jei claims that the family was infected with evil and that it is his job to purge the world of evil souls. As they continue to fight, Jei introduces himself as "the blade of the Gods" and prepares to kill Usagi, however, he is struck by a bolt of lighting and destroyed, although his soul (in the form of black smoke) survives.

Later, Jei, with a new body, watches Usagi using a bowl of water and, upon seeing his enemy with Kintaro, a holy child destined to have great powers, he summons four warriors to destroy Usagi. However, to his confusion, the warriors Jei summons end up being the Ninja Turtles. Deciding to use the Turtles, Jei poses as an injured old man and claims that Usagi had attacked him, getting close enough to brainwash the Turtles into becoming his soldiers. Jei, with the Turtles under his control, then tells them to kill Miyamoto Usagi, but leave Kintaro unharmed.

Towards the end of the episode, Leonardo spots Jei while watching over camp. Leonardo and his brothers try to attack Jei, but he ends up killing them off one by one; impaling Michelangelo, throwing Raphael off the cliff and crushing Donatello with telekinesis. With his brothers slain, Leonardo attempts to defeat Jei himself, only to be thrown to the ground with Jei preparing to stab him. Before this can happen, Raphael wakes Leonardo up, revealing that the entire experience had been a dream. Donatello then states that all of them had the same dream, and that they woke up when Jei killed them. While the Turtles, Usagi and Kintaro wonder what Jei is doing, Jei, watching from his bowl of water, laughs and states that they are the pawns of the Gods.

While the Turtles, Usagi and Kintaro are walking up the mountain, Michelangelo states that he spotted Jei standing on a mountain top. While Raphael and Donatello don't believe him, they then all see the clouds forming Jei's face and laughing at them. The Turtles then hear Jei's voice and are attacked by multiple cat ninjas.

Before he can help Usagi, Jei traps Kintaro in a magic resisting chain, and reveals that his real plan was to get the Turtles and Usagi to teach Kintaro humility and compassion, making him unlock his powers, so his spirit could posses him. Jei immediately begins preforming the ritual to transport his soul into Kintaro's body, however, the Turtles, having had the evil knocked out of them by Kintaro, disrupt the ritual and force Jei's soul back into his body by impaling him with Leonardo's sword. Jei fights the Turtles again and defeats them, slamming Kintaro into the ground in the process, enraging Usagi and getting him to violently attack Jei. Despite Usagi's efforts, Jei defeats him and prepares to strike a fatal blow, only for Kintaro to bite his wrist, giving Usagi the opportunity to pull Leonardo's sword with Jei's soul intact out of his body. Jei is then knocked off the bridge and falls to his death. 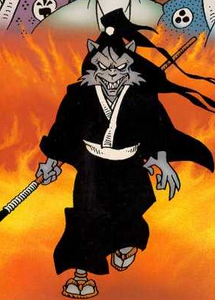 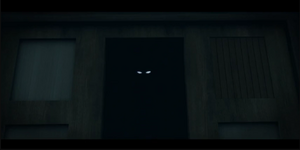 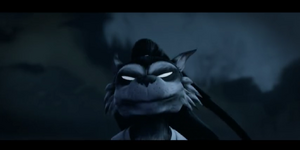 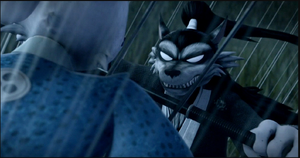 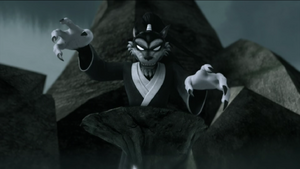 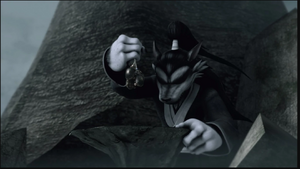 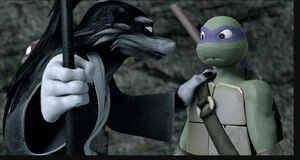 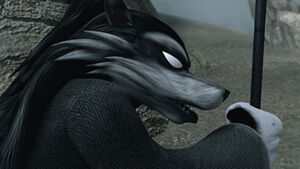 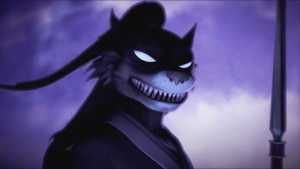 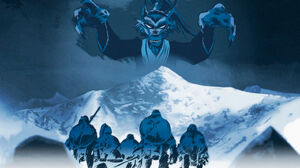 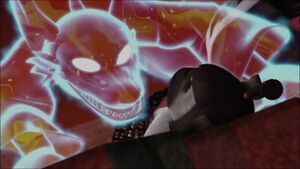 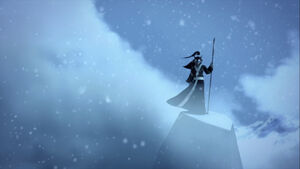 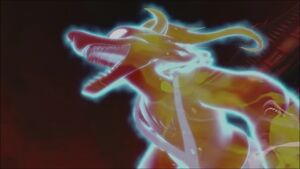 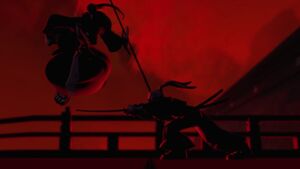 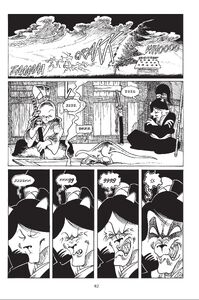 Retrieved from "https://villains.fandom.com/wiki/Jei?oldid=4213792"
Community content is available under CC-BY-SA unless otherwise noted.