Obey the orders of the Sith and destroy the Jedi and the Republic (formerly).

Be left alone by both Sith and Jedi and make his own path. Create things with LEGO using the Force.

Jek-14 is a LEGO minifigure released in the 2013 LEGO set 75018 Jek-14's Stealth Starfighter. He is a Force-sensitive Sith clone created by Count Dooku and presented to Darth Sidious in the flesh. He appears as a villain in LEGO Star Wars: The Yoda Chronicles, with the Sith intending to use him to turn the tide of the Clone Wars in their favor, but then later becomes a hero and one of the main characters during the series.

Under the orders of Darth Sidious, aka Chancellor Palpatine, General Grievous infiltrated the Jedi Temple, stole the four lightsabers from Yoda's four younglings and traveled to Kamino, where his master Count Dooku was waiting for him. There, they retrieved the Kyber crystals from all four lightsabers and combined them into an all-powerful crystal that they needed to create an army of Sith Clones to use them as their ultimate superweapons to turn the tide of the Clone Wars against the Jedi and the Republic.

As Dooku and Grievous began the operation, Yoda, R2-D2 and Mace Windu arrived and stopped their operation and destroyed the cloning booster. While the two Jedi arrogantly claim victory, Dooku uses the force to extract the power from the Kaiburr crystal to create one Sith Clone, which was number 14 named Jek.

Jek threw the two Jedi aside and rebuilt Dooku's cloning room under Dooku's orders, but hesitated to finish off the Jedi. Before Dooku could start creating the clones again, C-3P0 and Yoda's padawans arrive and destroy Dooku's cloning room entirely, pick up the Jedi and as R2 retrieves the Kyber crystal and boards the bus, the Jedi all escape back to Coruscant while Dooku and Jek-14 arrive to Geonosis, where they present Jek-14 to a pleased Darth Sidious, just as Grievous arrives.

Menace of the Sith

Jek was introduced to the Separatist gathering and, after showing off his powers and abilities, Darth Sidious revealed that Dooku had created a clonermatic machine to clone Jek into hundreds of Sith clones. They cloned Jek once, which left him weakened, but the resulting "Jek-15" ended up too small and weak to pose any threat. Just then, Obi-Wan and Yoda interfered and scared everyone away. Grievous, Darth Maul, Dooku and Asajj Ventress dueled the Jedi but were easily defeated.

The Jedi then turn their attention towards Sidious and tell him that he has lost. But Sidious replies with "No, no, no, no, no, no, no, no, no, no. You will be crushed! But not now. Gotta go." and escapes. The Jedi are then attacked by Jek, who overpowers Yoda again and imprisons him. Dooku orders Jek to finish him but Jek hesitates, as the Jedi is unarmed. Yoda then reveals to Jek that he was made from a Jedi crystal and that there was still good in him and tries to convince him to join the light side. But Dooku isn't having it and orders Jek to remain on the dark side. A dispute between Yoda and Dooku burst Jek into an outrage, and he reveals that he wants nothing more than to be himself and turns down both of their offers.

He then throws everyone back with a powerful force blast and escapes with Dooku and Grievous and Yoda and Obi-Wan hot on his trial, but Jek manages to escape them and hides from both sides. And so, this resulted in both Sith and Jedi searching for Jek, the Sith sending out several probe droids to search for him and the Jedi hiring Bounty Hunters to find him.

Meanwhile, on Hoth, Anakin is the substitute teacher for Yoda's padawans, but the four younglings find Jek there, creating Lego things with the force. The padawans befriend him and Jek tells them that he doesn't want to fight, just to create things and be left alone. Anakin finds Jek and attacks but is repelled by Jek's force shield. This attracted the attention of the probe droids and Jek is captured by Grievous and brought to the Sith command ship the Malevolence.

On the bridge, Dooku imprisons an unconscious Jek into the new and improved clonermatic machine and this time the cloning experiment was a thorough success, cloning Jek into an amount of Sith clones. This provides them the opportunity to attack the Jedi on Coruscant. A massive space battle erupts between the Sith fleet and the Jedi fleet, and soon enough, Anakin finds a vulnerable spot on the Malevolence and stabs it, destroying the command ship. The Jedi fleet then arrives back at Coruscant, but not all of the ship had been destroyed; the bridge remained intact without a scratch and with everyone on it still alive.

They were about to crash at the main entrance to the Jedi temple, but an undetected Darth Sidious uses the force to slow it down and make it land safely before that happens. Dooku gives the Jedi a chance to surrender, but they refuse and order him to give them Jek. Dooku does so, revealing that he's done with him anyway and Grievous throws a seemingly dead Jek at them.

Dooku then reveals all of his Sith clones and they attack the Jedi, but before they can, Jek (who is not dead and has now recovered his strength) stops them and depowers and destroys all of the Sith clones before sealing Grievous and Dooku inside the wreckage of the bridge of the Malevolence and throwing them back into space, telling them to leave him alone. Yoda praises Jek but tells him the same thing. He admits that he likes the Jedi more than the Sith but decides to make his own path and leaves.

Jek-14 was incredibly powerful in the Force. His dangerously enhanced Force powers were given to him when Count Dooku channeled Force energy from an extremely powerful Kyber lightsaber crystal put into his cloning chamber.

Jek-14 was able to fire continuous, powerful bursts of presumably Force energy from his left arm, which was transparent and seemed to be a reservoir of his power. He was agile, performing complex flips with ease and was able to erect a powerful, visible Force barrier to protect himself. He was also capable of holding off Jedi Masters Yoda and Mace Windu and piloting a starfighter. Upon arrival on Geonosis, he created a dent in the ground with his Force power to show off to Sidious. He also appeared to wield a white-hilted red lightsaber later in his career.

Jek-14 was originally intended to be part of a much larger "Sith clone" army. He has black, slicked down hair. He has a double sided face with the front having a serious expression with light blue eyes. The other side has a power-crazed expression with white eyes, bordered by light blue, with blue lightning emanating from them all over his face. The front of his torso is primarily white with a white and red breastplate. He uses a blue Lightsaber with a white hilt. Below his breastplate is a small, rectangular square. At the bottom is a red and white utility belt, and red and white leg armor. He has a transparent blue left arm which is his lightning arm and a white right arm. His hands are Dark stone grey. His hips are medium stone grey. 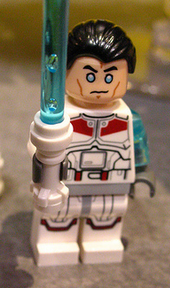 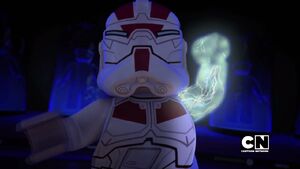 Jek-14 about to attack 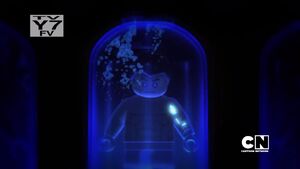 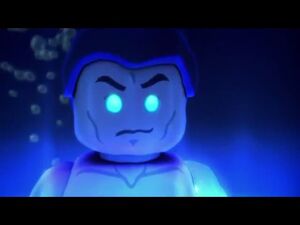 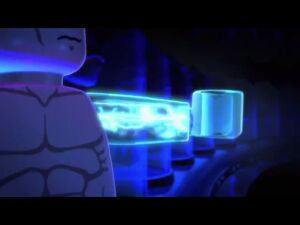 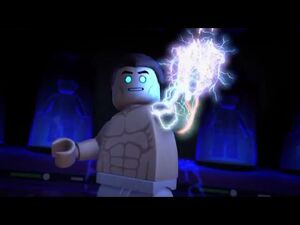