The Secret Of NIMH

Remain in the rose bush.
Steal the mysterious magic stone from Mrs. Brisby (failed).
Become the leader of the rats (failed).

Jenner is the main antagonist of the 1982 animated adaptation of Mrs. Brisby And The Rats of NIMH, known as The Secret of NIMH. He is a manipulative, power-hungry, heartless, selfish, and evil rat of NIMH who betrayed his own kind due to his desire to remain in the rose bush, rather than leave to a better life in Thorn Valley, as promised by their leader, the old and wise Nicodemus.

He was voiced by the late Paul Shenar, who later played Alejandro Sosa.

Jenner first meets Mrs. Brisby when she comes to the rats to ask for help moving her home. Jenner concocts a plan on the spot to use this as an opportunity to get rid of Nicodemus (the leader of the rats) whom he openly disagrees with. He immediately voices his support to help move the Brisby home under the impression that it would honor the late Jonathan Brisby. Mrs. Brisby was uneasy in Jenner's presence, but thanked him anyway.  As Nicodemus and Mrs. Brisby are leaving for their boat ride, Jenner carefully explains his plan to his confidant Sullivan; to sabotage the operation by cutting the ropes that will be used to lift and move the Brisby home in the hopes that it will crush Nicodemus. Sullivan expresses reluctance to taking such a risk and when he asks what to do about Justin, the head of the rat guards, Jenner simply replies "Leave him to me."

With Nicodemus dead and the rats fallen into grief, Jenner uses the situation to declare himself as the new leader and persuade the others to return to the rose bush. Brisby arrives during his speech and frantically warns the rats that NIMH will arrive in the morning to destroy the rose bush and any rats living within. Jenner, afraid that his plot to confine the rats would be ruined by the mouse, attempts to discredit her saying she has become hysterical, but the rats believe her and decide they must leave. Enraged by her meddling, he attacks her with the intention of killing her. Sullivan alerts Justin to the attack, causing Justin to throw himself between Jenner and Brisby.

As Brisby recovers from the initial violence, Jenner spots the stone of power given to her by Nicodemus and moves to attack her again, desiring the magical item for himself. Justin tries to stop him, but he is thrown aside and wounded by Jenner. Jenner tackles Brisby as she's running away and violently manhandles her trying to get the stone. Justin comes to her aid and the two rats engage in a sword fight right after Jenner slashes Sullivan across the chest, mortally wounding him. While they are dueling, Justin (having been fully aware of Jenner's growing resentment and animosity toward Nicodemus, coupled with having seen Jenner fly into a homicidal rage, attacking innocent creatures) correctly deduces that Jenner must have intentionally killed Nicodemus by causing the accident in the first place.

Jenner does not even attempt to deny this, openly admitting to Justin that he killed Nicodemus, stating "I've learned this much; take what you can, when you can!" and Justin replies, "then you've learned nothing.". This means that Jenner was too dangerous to kept alive, so Justin rose to his feet and stabbed Jenner in the stomach. As Justin makes his announcement to the colony that they were going to leave the rose bush and journey to Thorn Valley, Jenner sneaks up behind him atop a large stone and prepares to kill him from behind while Sullivan, who is dying, takes out his dagger. Before Jenner can attack, however, Sullivan delivers the fatal blow to the nefarious rat, throwing his dagger which strikes Jenner in the back, causing him to fall to his death.

Even for rat standards, Jenner is highly aggressive and intelligent, probably brought on by the experiments he endured at NIMH. In any case, Jenner sees violence as the solution for any problem (such as attacking the humans should they find and attack them first, and killing Nicodemus to remain in The Rose Bush). It all estimates to him being a mean, cruel, greedy, selfish, ruthless, homicidal, traitorous, and manipulative psychopath who will do anything for power.

Jenner is also an extremely callous master manipulator, who is exceptionally cunning and materialistic, and had no control over his morals (that is if he had any to begin with). Should his plan have succeeded, Jenner would have become an oppressive tyrant over his fellow rats of NIMH. Anyone's life was simply expendable to him and he valued them as a means to his own ends instead of living people. He forced Sullivan to help him kill Nicodemus and when he betrayed him, Jenner killed him without a second thought. He is pure evil at heart, and more than willing to kill the children in The Brisby House to assist his plan in usurping Nicodemus and to get rid of anyone who stood in his way.

Jenner before the council. 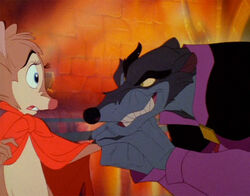 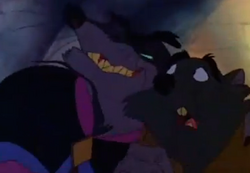 "Cut the lines, and the weight of it will crush his bones!"
DSC02246.JPG
Jenner's Evil Laugh. 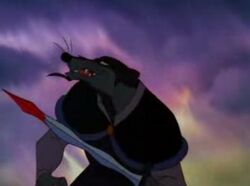 Jenner falling off the rock to his death.

Jenner's Fate.
Add a photo to this gallery

Retrieved from "https://villains.fandom.com/wiki/Jenner?oldid=1822879"
Community content is available under CC-BY-SA unless otherwise noted.