She was played by Lynda Boyd, who appeared on Sanctuary as the evil Dana Whitcomb.

Jennifer O'Brien was a coroner who was really, in secret, a Djinn. She was a different type of Djinn, as her kind fed on her victims' fear and left them dead with their bodies filled with a gelatinous substance. Regarding her physical appearance, Jennifer flashed a pair of glowing blue eyes. Jennifer was also a mother; her son was also a Djinn just like her, and he had been feeding on several victims and leaving the bodies lying around. To cover her son's tracks, Jennifer had the bodies burned years ago, but Sam, Dean, and Charlie Bradbury are on the case when a pair of them are discovered. Charlie distracts Jennifer with small talk while the brothers inspect one of the bodies, but Jennifer eventually catches on to all three of them.

Later on, the evil Jennifer appeared at Charlie's apartment and revealed herself as a Djinn by flashing her blue eyes. She later kidnaps Charlie and takes her to an abandoned warehouse where she feeds off her fear. Sam and Dean find Charlie at the warehouse, but Jennifer catches Sam and makes her move on him. Dean later appeared and killed Jennifer with a knife through her heart, and later enters Charlie's nightmarish fantasy and saves her. 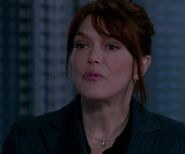