devour any who stray too close to her watery lair

man-eating hag
Jenny Greenteeth is a malevolent hag from English folklore associated with bodies of water such as rivers, streams and lakes - areas of land which the creature would haunt in order to lay in wait for unwary travellers to stray too close to the water's edge, at which point she would drag her victims into the water and drown them before devouring them : like many hags she had a fondness for killing and eating children but would attack any, regardless of age, that strayed into her path.

Jenny Greenteeth is depicted as a green, rotting witch with long arms and claws as well as vicious teeth by which to consume her victims - often weeds and plants grow from her body, which are signs of her aquatic nature as well as her symbolic nature : for in ancient times Jenny was used as a warning for children not to go too near dangerous bodies of water, where they could easily fall into said waters and become tangled in weeds and plants or (in the case of rivers and streams) swept away. 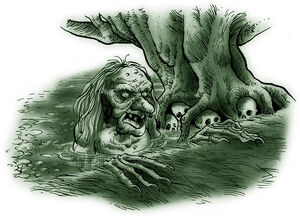 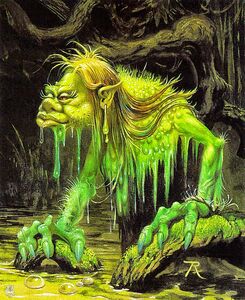