Defeat Kamille and the AEUG.

Become leader of the Titans (both failed).

Jerid Messa is a member of the Earth Federation's Titans force and a major antagonist in Mobile Suit Zeta Gundam, as well as the arch nemesis of Kamille Biden.

In the Japanese language version of the anime, he is voiced by Kazuhiko Inoue who is best known for voicing Kakashi Hatake in "Naruto" and "Naruto Shippuden", Deep Mirror/Red in "Happiness Charge Pretty Cure!" and Ryūkotsusei in Inuyasha as well as Truth in "Eureka Seven AO", and in the English dubbed version, he is voiced by Ethan Cole.

In U.C. 0063, Jerid was born under soldiers. When he became a member of the Titans, he hoped to one day be a leader without any help. On Green Noa 1, he had his first encounter with the young Kamille Bidan by insulting his name. During Gundam MK II training, Jerid unintentionally damaged a building and had to move his mobile suit to an unprotected building. Hearing the incident that the Gundam prototypes were stolen, Emma is sent to recapture them, while Jerid is baiting Kamille and the mobile suit with a capsule containing Hilda, Kamille's mother. As soon as Kamille managed to get his mother insights, Jerid fires his shots, but only kills Hilda. Soon, Emma Sheen defected to the AEUG. Jerid met and fell in love with Lila Milla Rira on the Alexandria. She taught him how to survive space combat and gained his trust. At Space Colony 30, Lila alone helped the Federal Forces against the AEUG, but she was killed, to Jerid's horror.

Jerid tried to avenge Lila in the atmosphere over Jaburo, but fails greatly and even loses his best friend, Kacricon Cacooler to Kamille. He then fights Kamille at the Jaburo base, despite that a nuclear weapon was set to detonate. He escaped, thanks to a woman named Mouar Pharaoh. Under Paptimus Scirocco, Jerid was given a new Gabthley mobile suit and love for Mouar. In another battle with the Argama, Mouar gives up her life to save Jerid from a fatal attack from Zeta Gundam. When Mouar's spirit tells him he can lead people down the right path, he tries to critically damage the Argama, but is disabled by Sheen and Kamille. He later appears during the battle of Mount Kilimanjaro for medical treatment. During the battle while on medical attention, he runs into Kamille who has infiltrated the base, and Four Murasame, and follows them to the infirmary. While Kamille attempts to find a way to restore Four's memories, Jerid comes into the infirmary, holding Kamille at gunpoint, but Four tackles him, allowing both her and Kamille to escape. Jerid pursues them both, and a fight ensues on the mountainside of Kilimanjaro that ends with Kamille throwing Jerid off the cliff. Jerid, however, survives the fall and climbs back up the cliff to a secret entrance of the base. He then decides to take a prototype mobile suit called the Byalant, in an attempt to get revenge on Kamille. After a battle between Four Murasame and Bidan was over, with him trying to get Four out of the Psyco Gundam, Jerid arrives in the Byalant with the intention of killing only his rival, but Four takes the hit and dies in the process. He then attempts to disrupt a conference from Char Aznable at the city of Dakar, but in the end, favor sways from the Titans.

During space combat at the Gate of Zedan, Jerid protects his fleeing comrades from the Axis asteroid. He also kills Apolly Bay who was protecting Fa Yuiry. Suddenly, Jerid unlocks his Newtype abilities. In the final battle of Gryps, Jerid fights Kamille using the Baund Doc mobile suit. Kamille believed that Jerid would keep the war going and ends the duel by sending Jerid and his mobile suit into the exploding remains of the Radish. While cursing Kamille, he dies in the blasts.

Jerid was a ruthless and egotistical Titans member who had no regard for human life. He one day seeks to become the leader of the Titans in his own way without others helping him. Despite his pride, he would ask Lila for help to become a better soldier. He is also extremely arrogant, believing that what the Titans do is right and would ultimately lead to his demise at the hands of his rival, Kamille Bidan. 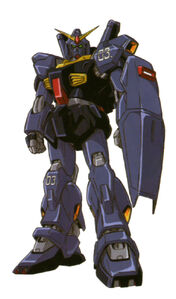 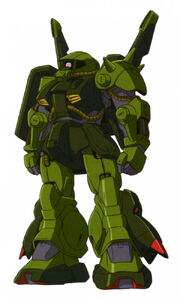 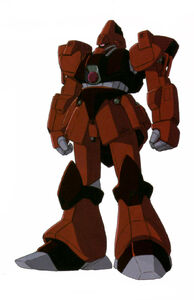 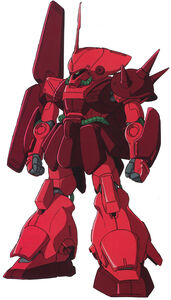 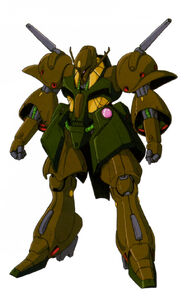 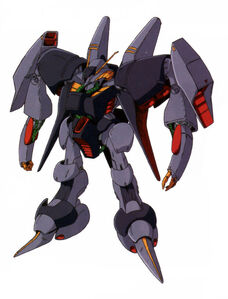 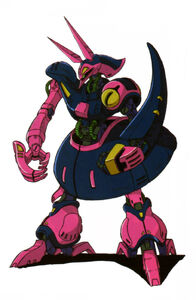