The Prince of Many Faces

Second-in-command of the Scarlet King's army

Assisting the Scarlet King in his goal of destroying creation.

Jeser, more famously known as the Prince of Many Faces, is a minor antagonist in the universe of the SCP Foundation. He is an old god and the right-hand man of the Scarlet King.

Jeser, the Prince of Many Faces, was once a proud god who ruled a few dozen worlds, before to the Scarlet King and his countless legions came and conquered them. Jeser saw from the beginning that nothing good would follow from resisting such a powerful being and allowed the King's conquest to be easy and relatively bloodless. He joined the King's cause, alongside other deities such as Moloch and the Hanged King.

He decided to make himself useful, and soon rose through the ranks in the Scarlet King's court, eventually becoming the King's right-hand man. While his power was no longer absolute, he could still receive any pleasure and inflict as much pain as he wanted, as the King was a generous lord.

He would often work with Moloch during the conquest of the multiverse. Jeser would warp the wills of mortals, while Moloch would bring forth shame in their souls. Just like the rest of the gods affiliated with the Scarlet King Jeser also became worshipped by the evil and powerful Daevite civilization.

Despite all this, the Prince of Many Faces secretly despised his lord, and often fantasized about replacing his master as King. The Scarlet King knew this and took him to his meeting with the All-Death. Jeser saw the Scarlet King's attempt to kill the All-Death, and that it was infinitely more powerful than him. After the meeting ended the Scarlet King turned to Jeser and told him that this was a lesson about betraying him; if he usurped him, he would take his power, his servants, dominion over all and his enthrallment to the All-Death.

Jeser was a sadistic and intelligent deity. He enjoyed causing pain and mayhem, both as ruler of his two dozen worlds, and as the right hand man of the Scarlet King.

He was also an opportunist. He saw from early on that he could not resist the Scarlet King, so decided to join him, though he secretly despises the fact that he still had to listen to someone. He has fantasized often about being the one who sits on the throne, and holding the chains of the countless tormented consorts and concubines of the King.

The Scarlet King himself appears to be aware of Jeser's true feelings, though he does not appear to be threatened by the Prince of Many Faces. 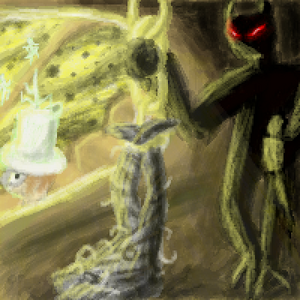 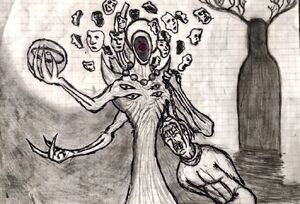 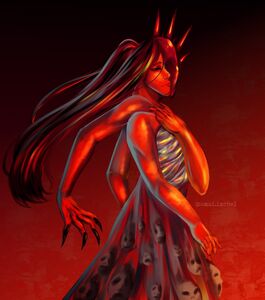