To frame Spencer Hastings for her daughter's alleged murder.

To protect Charlotte DiLaurentis after she supposedly killed Alison.
To get rid of her twin sister Mary Drake.

Jessica DiLaurentis is one of the main antagonists from "Pretty Little Liars". She is at first presented as the sweet, damaged mother of Alison; however, it is soon revealed that she has dark secrets of her own and is somehow involved with "A". She is the main antagonist for the final episodes of Season 4 and a "Bigger Bad" for most other seasons.

She was portrayed by Andrea Parker, who also portrayed Mary Drake.

Known for her controlling ways, Jessica buried her own daughter; Alison, after she thought Charlotte DiLaurentis had unknowingly killed her with a rock to the head. After that, she tried to frame Spencer Hastings for the murder. Although Alison was found to be alive, Jessica was soon murdered by an unknown assailant and buried in the Hastings backyard by villainous "A".

In "Hush, Hush, Sweet Liars," it is revealed that Jessica has a twin sister named Mary Drake, who is the birth mother of Charlotte DiLaurentis. 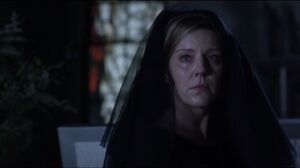 Add a photo to this gallery
Retrieved from "https://villains.fandom.com/wiki/Jessica_DiLaurentis?oldid=3870072"
Community content is available under CC-BY-SA unless otherwise noted.